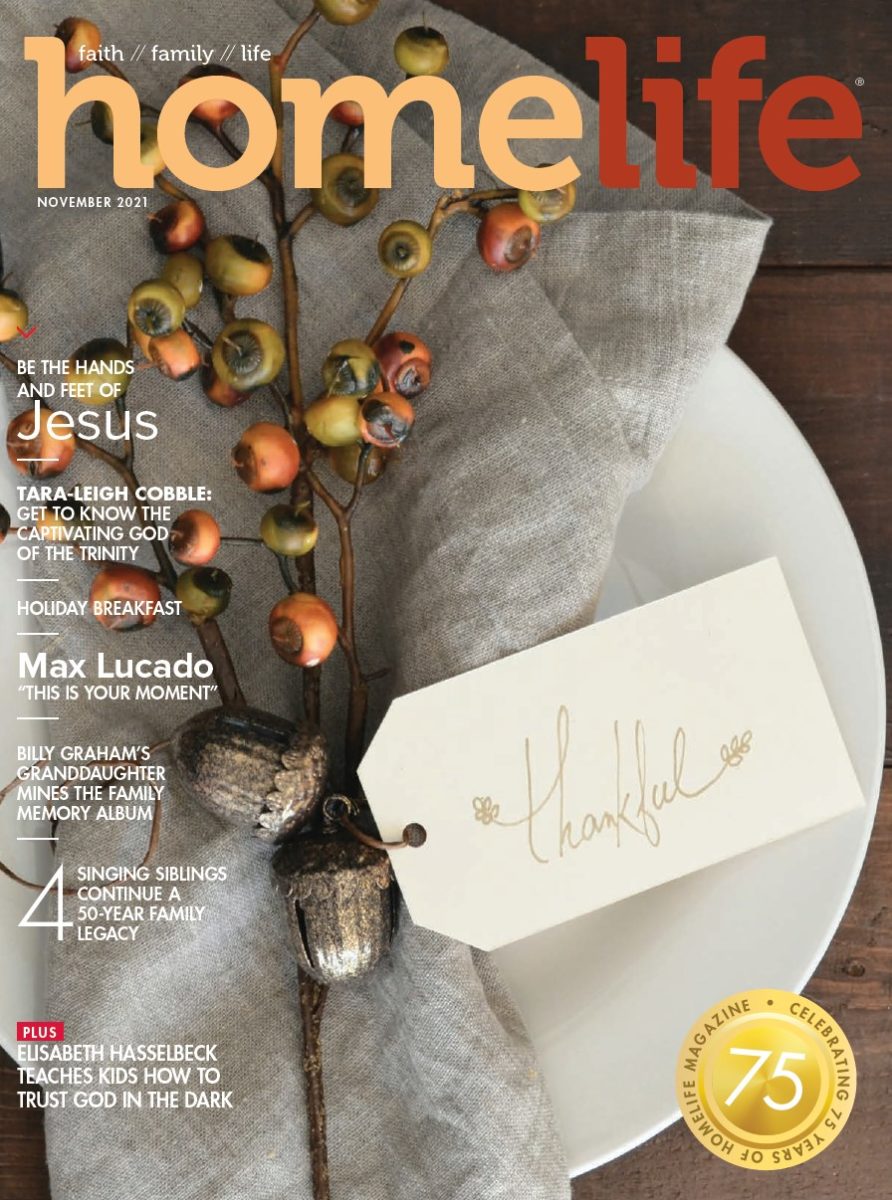 GET TO KNOW THE CAPTIVATING GOD OF THE TRINITY.

IF YOU HAD TO DESCRIBE God’s personality, what would you say? Not what He does, but His demeanor. Not what He’s capable of, but what He’s like.

“In your presence is abundant joy; at your right hand are eternal pleasures” (Ps. 16:11).

Would it surprise you to know that God is happy? He is infinitely joyful! And because He’s so delighted, that’s how He can be delightful to us — by sharing who He is with us. If joy is your goal, knowing the God of the Trinity will be supremely useful to you. In fact, this is the only path to find true joy.

But that doesn’t mean it will be an easy path. Everything beautiful in life has some level of difficulty attached to it that we can’t avoid, including our best and strongest relation­ships. In all relationships, we have to go through the process of getting to know that person, then we face misunderstandings and miscommunications along the way. Perhaps we encounter unmet expec­tations — all as a part of building the relationship. People are wonderfully complex, aren’t we?

Our relationship with God has a lot of those same com­plexities because He’s a person too. Three persons, actually — Father, Son, and Holy Spirit. J.I. Packer says the doctrine of the Trinity, “Confronts us with perhaps the most difficult thought that the human mind has ever been asked to handle. It is not easy, but it is true.” Augustine is credited with saying something along the lines of, “Whoever denies the Trinity is in danger of losing their soul. Whoever tries to comprehend the Trinity is in danger of losing their mind.”

What Keeps Us In The Dark

What makes this doctrine so challenging? Why do people tend to brush over it instead of dig in? Here are a few things that contribute to our collective confusion and difficulty with the Trinity.

If you’ve ever been part of a Bible study or a Sunday School class, you’ve likely heard analogies of shamrocks and eggs and H2O. Maybe someone you know has drawn a picture of a triangle or a shield. Every analogy of the Trinity falls short on some intellectual level, simply because there’s nothing else in existence quite like God. Some analogies are better than others, but even those usually require caveats. Other analogies are downright heretical — which is to say, they tell more of a lie about God than a truth, and they’re more harmful than helpful in giving us a correct view of God. We often prefer to simplify God because it’s easier than study­ing His complexity. But is that how you want to be known? Is that how you aim to build a relationship with anyone you love? Simplified explanations fall short of being enlightening or fulfilling in our relationship with God.

This is my own answer, and I realize it may not apply to you: My selfishness was one of the biggest hurdles that kept me from digging into the Trinity. I preferred to focus on God’s promises to me and all the things He could do to benefit me, so I was content to stop short of looking for who He is. I tuned out when someone mentioned the Trinity — not because I already knew all the details, but because I didn’t yet know enough! I was in for a real surprise when I did begin to study the Trinity. It isn’t just a theological concept; fundamentally, it’s a relationship. To have a healthy, function­ing relationship, you have to look beyond yourself and get to know the other person involved.

Although the Bible doesn’t use the word Trinity, that doesn’t mean it doesn’t address it. In fact, the doctrine of the Trinity is woven all throughout Scripture, starting in Genesis 1:1. Jesus talks about it in the Gospels, and the apostles affirm it throughout the New Testament. Still, the early church struggled to summarize it until Tertullian, a theologian who lived about a century after Jesus’ resurrection, created the word Trinity to succinctly reference Scripture’s teaching about God.

This doctrine is absolutely necessary to the Christian faith. Its importance can’t be overemphasized. Theologian Ligon Duncan says that by asking, “Is the identity of the Trinity important to the gospel?” is similar to asking, “Is who your wife is central to your marriage?” Without the Trinity as the core of our beliefs, everything else begins to come unglued and unhinged. You can’t have a Christian faith without a triune God. This is a bold statement, but the creeds support it. Every other Christian belief is built on this foundation.

It’s tempting to diminish the importance of this and to seek a false peace by simply focus­ing on the Word of God. But that’s shallow at best and foolish at least. In fact, God’s Word is precisely where we learn about His Persons; He’s given it to us so we can know Him in greater depth. How heartless and arrogant to want to know less of Him than He has made possible! People who truly know God have always wanted to know God more — both for their own sake and for the sake of being able to talk about Him and His love with others. He loves to be known and understood and loved, just like you love to be known and understood and loved.

When The Lights Come On

Have you ever had to fumble through your house in a power outage, bumping into walls and bruising your shins on the coffee table? You easily navigate your way around that fur­niture on a daily basis, but with the lights off it can be more of a challenge. Many of us who have spent time in church or in Scripture keep bumping into the Trinity but without being able to identify or describe it clearly. And there’s a good reason for that. Through most of the Bible, God doesn’t say a lot about the Trinity — at least not directly.

It’s not as though God was being cruel in the Old Tes­tament, though. He wasn’t trying to bruise any shins. He knows relationships work best through progressive reve­lation, a gradual revealing of more and more information over time. This is how healthy relationships form; we don’t expect to share or learn everything the first time we meet someone. And this is how Scripture describes God’s rela­tionship with humanity. He didn’t reveal His whole plan for His people at one time. Instead, He used different means at different times, patiently giving us more information piece by piece as He moved through the process.

If you’ve ever studied the Old Testament, you may have come away thinking something along these lines: Why is God so angry in the Old Testament? I like the New Testa­ment better. God is so much nicer after Jesus shows up on the scene!

If you’ve had those thoughts, you’re not alone. I’ve had them too. But when we pull God and His actions out of context as we’re often prone to doing, it’s easy to misunder­stand His character. If we divide Him into three Persons without remembering that He is one, we may begin to assign certain temperaments to the Persons of the Trinity (the Father is the angry one, Jesus is the nice one, and the Holy Spirit is the mysterious one). The good news for us is that this is theologically impossible. For all of us who’ve ever felt like the Old Testament God is unlikable, Scripture is here to set us straight and invite us into something much more beautiful and winsome.

As complex as the Trinity may be, you and I benefit personally from the fact that God is both one and triune. We would be remiss to try to simplify His complexity, because we would miss out on the beauty of it! After all, stained glass windows are more captivating because of their many panes and colors. God’s complexity adds to His beauty, and not only does He invite us into His mysteries, but He offers wisdom if we ask Him (see Jas. 1:5), and He shares His secrets with His friends (see Ps. 25:14) — and that’s you!

The closer we lean in to see God in all His complexity and beauty, the more secrets and love we’ll discover. His joy will embed itself into our lives because He’s where the joy is!

Tara-Leigh Cobble has a zeal for biblical literacy. This zeal led her to create D-Group (Discipleship Group), which has grown into an international network of over 300 Bible studies that meet every week in homes, churches, and online. She also writes and hosts a daily radio show called The God Shot, as well as a daily podcast called The Bible Recap, which unpacks the richness of Scripture alongside the chronological one-year reading plan.

This article originally appeared in HomeLife magazine (November 2021). For more articles like this