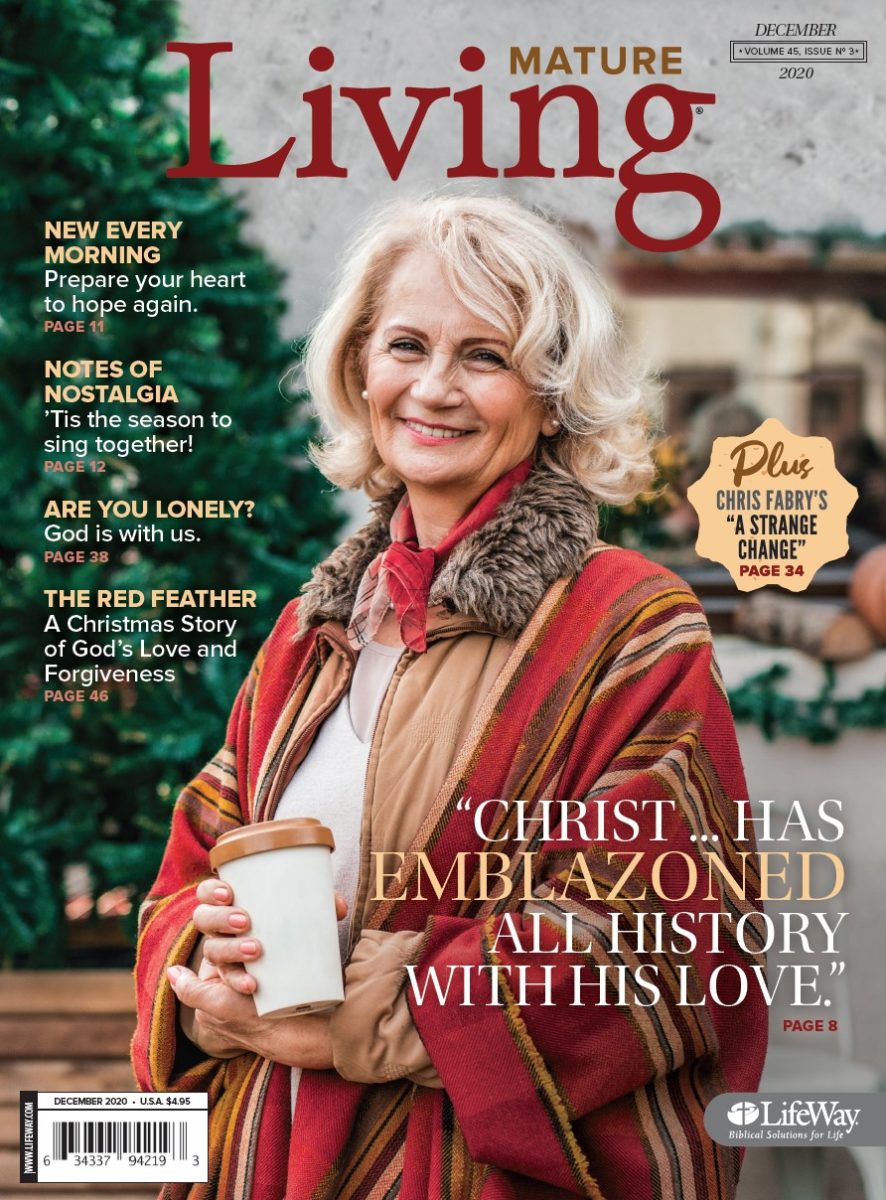 Sheltered in His Sovereignty

When we wait humbly on God’s will, we can rest assured in His mercy and power.

WHEN I WAS A KID, the Christmas season didn’t begin the day after Thanksgiving nor with the first Sunday in Advent. The countdown to Christmas always began with the arrival of the Christmas catalogs, the wish books from Sears, Roebuck and Co.®; Montgomery Ward®; and JCPenney®. Our little town had no store windows to entice me, so I quickly dog-eared the toy sections in each catalog.

Waiting is part of the whole business of Christmas. It defines our Decembers. But waiting doesn’t always bring tingling excitement or a countdown of days. For some people, December is terribly heavy and endless. Ask any counselor.

Waiting Is Not a Waste of Time

Long waiting was the dark curtain behind Gabriel’s announcement to Mary. She was young, and the young know far less about the weights of waiting than the old. But Mary was part of a people who had waiting in their blood. No other nation waited as the Jews had. For 2,000 years, they’d waited on God’s promise to Abraham, fueled and filled out in His promises to Moses, David, and the prophets. Their prophets raised the banner promising God’s Messiah and “searched and carefully investigated” (1 Pet. 1:10) when He would come, but God kept His secrets and made them wait. And the people walked in darkness.

Waiting, when it requires painful perseverance, tests our faith in God’s sovereignty. We don’t necessarily doubt He is the Lord of all, but we find it harder to find comfort from that. Our faith scrabbles for a grip, like a man sliding down a cliff.

When Gabriel announced Jesus’ birth to Mary, she sang, and her song in Luke 1:46-55 gave lyrics to a people who had waited a long time for God to act. Her carol helps us remember how to position ourselves while we wait for our sovereign God and assures us what we can most certainly hope for.

Mary began, “My soul magnifies the Lord, and my spirit rejoices in God my Savior, because he has looked with favor on the humble condition of his servant” (Luke 1:46-48). Later she sang, “He has toppled the mighty from their thrones and exalted the lowly” (v. 52). Waiting makes people impatient, and impatience is fed by self-importance. But waiting on God requires humility. We must get low, become child size. Our agenda carries no weight. Mary was useful to the Lord because of her “humble condition.” Only small people, those poor in spirit, recognized Jesus as God’s Messiah.

We think faith means having confidence in a certain outcome — the prodigal will come home, the disease will be healed, the money will come in. But faith can’t always see that. If it did, we’d never be afraid. But sometimes we are afraid, even though we believe in God’s sovereignty. Faith doesn’t require certainty about the outcome, but faith must take us to our knees before God in the posture of His servant. The “High and Exalted One … says this: ‘I live in a high and holy place, and with the oppressed and lowly of spirit, to revive the spirit of the lowly and revive the heart of the oppressed’” (Isa. 57:15).

Waiting, when it requires painful perseverance, tests our faith in God’s sovereignty.

As we come to the end of this challenging year, we demonstrate our trust in God’s sovereignty not by confident assurances that things will get better (because they might not) but by bowing low before our Almighty God, ready to obey as His glad servants. That is faith.

We Can Trust God’s Mercy

Whereas God’s sovereignty is often clouded in mystery, He welcomes us to come boldly, anytime, to His throne of grace to find His mercy. Mary sang, “His mercy is from generation to generation on those who fear him” (Luke 1:50). And “He has helped his servant Israel, remembering his mercy to Abraham and his descendants forever, just as he spoke to our ancestors” (vv. 54-55). Israel didn’t know how or when God would send His Messiah, but those who trusted His Word knew for certain that God would be merciful to them. He would not treat them as their sins deserved nor parcel out His mercy based on their merit.

The crux of God’s mercy is Christ. “Every one of God’s promises is ‘Yes’ in him” (2 Cor. 1:20). God has revealed His long-concealed mystery to us: “Christ in you, the hope of glory” (Col. 1:27). So when we must wait, when we must endure hard times, we can be certain that the outcome, whatever it is, will reveal God’s mercy. In the end, we will receive from the Lord more than we deserve or could ever earn.

In 2 Corinthians 1:3, Paul called our sovereign God “the Father of mercies and the God of all comfort.” The Puritan Thomas Goodwin wrote, “As large and as various as are our wants, so large and various are his mercies. … All the mercies that are in his own heart he has transplanted into several beds in the garden of the promises, where they grow, and he has abundance of variety of them, suited to all the variety of the diseases of the soul.”

My friend Bill worked for a time with a godly woman named Marion. Her son had been in a combat unit in Afghanistan and, although he was home, he had been distant.

“I don’t know how he’s doing,” she said. “I haven’t talked with him for about six months. But God’s plan is working.”

“What plan is that?” Bill asked.

If this season weighs heavily on you, exercise your faith in these two ways. First, humble yourself before our Almighty God. Get low. Make no demands. Set no conditions. Bow before Him as His servant. Secondly, whatever lies ahead, no matter how foreboding, rest assured of God’s mercy. Jesus Christ is both proof and guarantor of it.

We’re told about two other wait-ers at the birth of Christ — Simeon and Anna, both elderly. When each of them saw the baby Jesus, they knew their waiting was over even though nothing about their circumstances would change. They saw the end from the beginning. (See Luke 2:29-38.)

We have not only seen God’s salvation; we whose faith is in Jesus have received that wondrous gift. But the glorious day of His appearing is yet out ahead of us. In life’s bleak midwinter, that hope is God-given therapy. Our hope is what sets us apart as God’s people.

Philip Yancey writes in The Jesus I Never Knew, “I know a woman whose grandmother lies buried under 150-year-old live oak trees in the cemetery of an Episcopal church in rural Louisiana. In accordance with the grandmother’s instructions, only one word is carved on the tombstone: ‘Waiting.’”

Our hope is what sets us apart as God’s people.

LEE ECLOV recently retired after 40 years of pastoral ministry, focusing now on the ministry of speaking and writing for pastors and ministry students. He has authored three books, including Feels Like Home: How Rediscovering the Church as Family Changes Everything.

This article originally appeared in Mature Living magazine (December 2020). For more articles like this, subscribe to Mature Living.