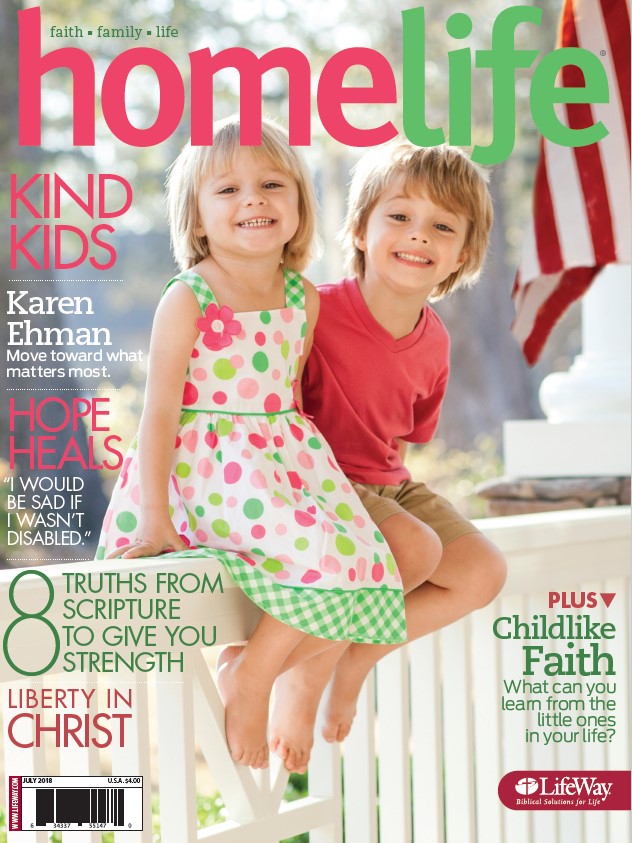 Katherine and Jay Wolf have a different spin on joy in life.

A MISSIONARY TAKES a journey to offer a life-saving message.

“Similarly, we felt that Katherine has come a long way — from the brink of death, really, to share something important,” Jay Wolf says of his wife.

Katherine teetered on that brink a decade ago, when the Wolfs were merely 26 years old. After gradu­ating from Samford University in Birmingham, Alabama, the couple moved to Los Angeles for Jay to attend law school and Katherine to pursue a career in the entertainment industry.

On April 21, 2008, Jay was three weeks away from grad­uating, and Katherine was at home with their 6-month-old son, when she suffered a massive brain stem stroke. Doctors didn’t expect her to live. After emergency surgery and 40 days on life support, she pulled through.

The Wolfs embarked on a long road of recovery together. Katherine underwent 11 surgeries and began two years of brain rehab — relearning to eat, speak, and walk.

As the couple adjusted to their new normal, they held onto their faith in God’s sovereignty. They believed the stroke wasn’t a detour in His plan — even though their lives had taken a heartbreaking turn.

Throughout this process, the Wolfs shared their journey on social media, and people all over the country gravitated toward their relentless hope. Katherine is clear about where it comes from.

“The tremendous hope that has fueled my recovery and allows us to press on and persevere even unto this day is all rooted in Jesus,” she says.

The Wolfs soon realized that God was giving them a powerful platform to display His everlasting goodness to a culture that often looks at a medical crisis and only sees despair. How was it possible that Katherine’s body had lost ability, yet she had gained purpose and joy in life?

“We just had this huge cheering section saying, ‘Your story matters; it’s changed my life. It’s helped point me to Christ,’” Jay explains. “We knew that this story, and Katherine’s survival, her recovery, her ability to commu­nicate, her personality still being there, and all these factors were not an accident.”

The couple marveled at how Katherine could type with one hand on her phone and reach hurting people across the world with the hope of Christ. Her message: The thing we have that ultimately needs healing is our souls, not our bodies.

As Katherine’s physical strength improved, the Wolfs began to travel and speak. They witnessed incredible fruit from using their story to encourage those with broken bodies, broken brains, and broken hearts. Jay put his law career on hold to start their nonprofit, Hope Heals, and the couple dove into full-time ministry together with the motto: Redefine Healing. Manifest Hope.

“We redefine what it means to be healed in a very basic sense as Katherine in her wheelchair gets up on stage with joy, laughter, and winsomeness, and says, ‘I am healed,’” Jay says. “That’s a redefined picture for every brokenhearted person — not just a person with a disability or brain injury, but people who are struggling to get out of bed in the morn­ing — to see someone else who has overcome through the power of Christ.”

Their message touches a variety of listeners. Katherine says she’s received responses from people facing all kinds of issues, all looking for lasting hope and healing.

“This is a universal story of suffering and redemption, and that’s available to anyone in any circumstance,” she declares.

Katherine is also honest about how at first she didn’t want to be the “miracle girl in the wheelchair.” But over time, she came to see the strange gift of wearing her brokenness on the outside. The wheelchair gave her the ability to quickly connect with the brokenness everyone carries on the inside — what she and Jay call “invisible wheelchairs.”

“People can clearly see my wheelchair and other people in physical wheelchairs, but what many overlook are the invisible wheelchairs inside of themselves,” she says. “That is everything from the insecurity, to the past that haunts them, to the anxiety they feel, to just the scars of life inside. We’re all disabled.”

Embracing the Hard and Good

Five years into ministry, Hope Heals continues to grow and evolve. The Wolfs offer a refreshing vulnerability and humor about the difficulty that comes with life on earth and the necessity of relying on Christ. Jay even jokes about how he and Katherine struggle to put together a cohesive talk because of their different communication styles.

“We’re just two very imperfect people with a lot of broken­ness and pain, who together, through the hope of Christ, are doing something really resilient, joyful, and exciting,” he admits.

Katherine adds that one of the messages she’s been pas­sionate about driving home to audiences is that “hard” and “good” aren’t mutually exclusive.

In 2015, the Wolfs’ good story gained a new chapter, when their second son was born. They gave him a middle name after the surgeon who helped save Katherine’s life. Jay wrote on their blog that their child’s birth was “a further reminder in flesh and blood of the story of the gospel, new life where there should be none.”

Katherine says she loves how God is also teaching their children to live out the “hard and good,” as they watch their parents navigate it day after day.

In April 2016, the Wolfs co-authored a book about their jour­ney. The next year, they started Hope Heals Camp in Ala­bama to minister to individuals and families with disabilities — a population that often suffers from tremendous isolation.

“If you’re disabled, it’s hard to get out in the world and face it in any capacity, and it’s difficult to show up in life for any­thing — much less to be represented,” Katherine says.

Hope Heals Camp helps facilitate a lasting community grown from the disabilities in everyone. Last year, over 450 participants and volunteers came from 19 states, represent­ing 20 types of disabilities. Their ages ranged from three months to 73 years old.

“A very unique, tight-knit community comes out of those camps,” Katherine reflects. “When people with disabilities see others in their same position, they connect deeply and quickly because they know their need for each other is so strong.”

In fact, the Wolfs have discovered a wonderful strength in needing others that runs countercultural to the Western world’s focus on independence.

“It’s not weakness or failure or inability to be strong when you depend on someone else. Likewise, they get to depend on you, and that’s really a picture of compassion,” Jay beams. “Katherine has an over-the-top amount to offer the world and me, and I get to offer a lot of things to her too, but it’s a two-way street, 100 percent.”

They embrace 2 Corinthians 12:9, “I will most gladly boast all the more about my weaknesses, so that Christ’s power may reside in me.”

“The beauty of living disabled is there are no other options, so you quickly learn you have to have other people to be a part of your life,” she shares. “It creates a beautiful community. I think that’s one reason we’ve had these sum­mer camps.”

Finding a Seat at the Table

On a larger scale, the Wolfs have a lifelong goal to empower the church to reach the disabled. They are the largest unchurched people group in the United States and the world — making up 20 percent of the population.

“It’s such a huge opportunity. You don’t have to go to Africa to minister to the largest unreached people group. They’re right in your community. That’s pretty exciting,” Jay shares.

They urge churches to create more opportunities for disabled individuals and their families to experience the love of Christ. This could mean hosting a respite night to babysit children with disabilities, or building accessible facilities, or staffing childcare on Sundays that makes a mom of an autis­tic child feel like she can attend a worship service for the first time.

Katherine has gained perspec­tive and encouragement on the issue from her friend and world renowned Christian author and advocate Joni Eareckson Tada, who became a quadriplegic at 17 years old.

“I love Joni’s quote that she has a seat at the table. Oh yes, she does. But she needs help to open the door to get to the table. And I love that idea that disabled people do, in fact, absolutely have a seat at the proverbial table. But they’re going to need help to get there,” she says.

In a decade, Katherine and Jay have grown from Southern college kids, to newlyweds in L.A., to itinerant ministers and communicators of gospel hope. Looking back, they’re able to see God’s fingerprints everywhere.

“Ten years out from the stroke, I can really see that this was Plan A for my life. It wasn’t this crazy departure from how life was supposed to work out for me, but this was exactly what God had for me,” Katherine assures. “And in fact, God was preparing me my entire life for this, having wired me when He knit me together in my mother’s womb.”

It’s a calling they never could have imagined, yet couldn’t be more thankful for.

“It’s not wasted on us that this is a great gift, and it’s a huge honor, and it’s a huge stewardship,” Jay realizes. “It’s been the joy of my life to get to do this together with Katherine.”Last year, the couple spoke to an estimated 130,000 people in 15 states. All the while, they continued the struggle with physical health — as Katherine was on the verge of having another stroke last May and broke her leg a couple of years ago that set her back in learning to walk.

“There’s always the possibility around every corner, for any of us, that life may break apart from what we thought it was going to be,” Jay muses. “Yet, I think these ten years have taught us to be all-in, really wholeheartedly to the present moment and what God has put before us right now, but to hold it all loosely too. Living in that tension is the lesson of the last ten years.”

And what are their dreams for the next decade?

“We’ve been through a lot, we’ve been given a lot, and now we want to give away a lot. We want to hope it forward,” Jay declares.

“I would be sad if I wasn’t disabled.” Katherine laughs at how crazy that might sound. “Most people, I imagine, would do anything in the world to be able to walk again, or drive again, or fill-in-the-blank again. And I definitely have annoyances — things I can’t do or body limitations — but I would probably say 99 percent is great. I love my life, and I would say more of this good life I have in the next ten years would be what I would want.”

Courtney Keen specializes in nonprofit communications, with a soft spot for underdogs, ordinaries, and the overlooked. She has reported on international humanitarian efforts in places like Myanmar, Vanuatu, and most notably, Nepal, after the 2015 earthquakes. Her work stateside includes organizations in New York City, North Carolina, and Nashville — her beloved hometown. Explore her writing at courtneykeen.com.

This article originally appeared in HomeLife magazine (July 2018). For more articles like this