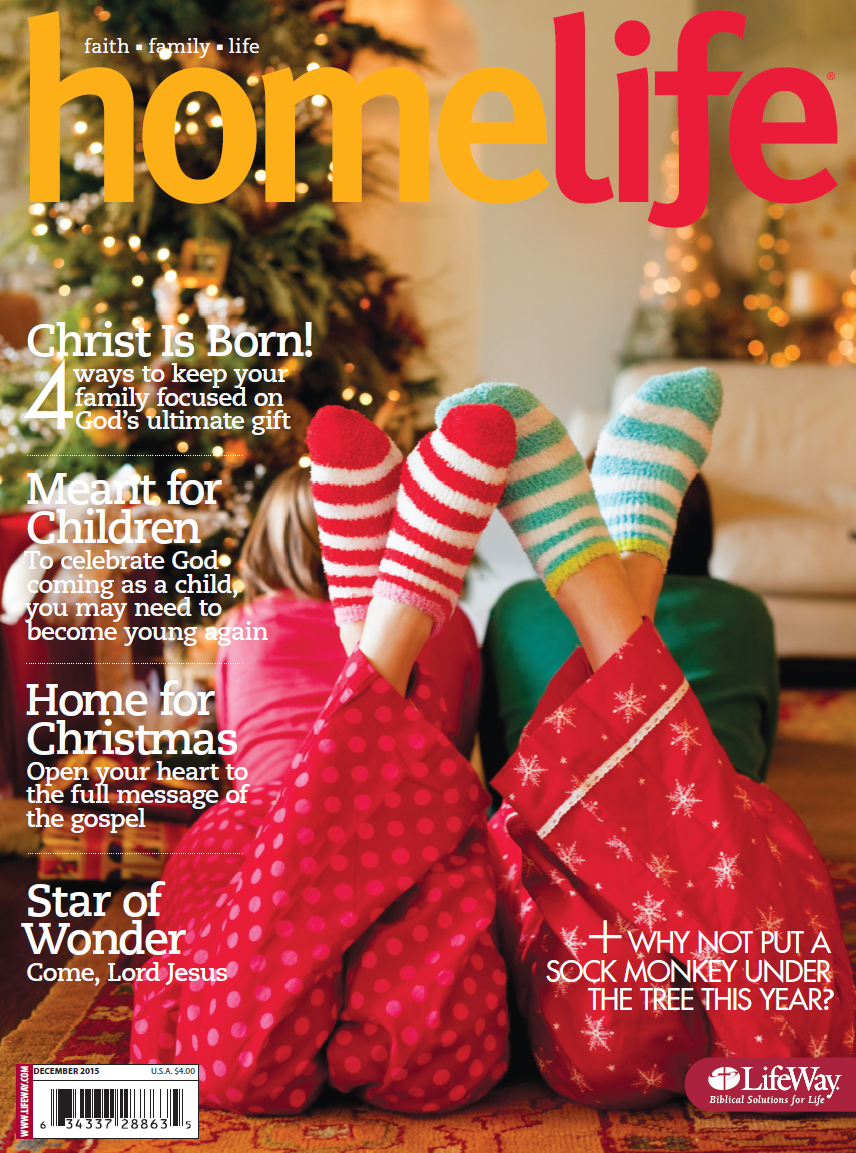 Joy to the world! The voices of the praise team, with a huge Christmas tree behind them and red poinsettias on every side, filled the crowded auditorium. But Beth, who sat toward the back, felt no joy. She felt hardly anything at all, other than numb and sad.

Beth was sad in part because she remembered Christmas in the past as such a happy time, filled with friends and family. But this Christmas was different. It was her first year out of college, living in a new city with an exciting but challenging job with a ministry for at-risk youth. It had been harder than she had expected to find friends, and to plug into a church. She hadn’t remem­bered a December that was so cold, dark, and gray. For weeks, she had felt exhausted but unable to sleep; she woke before dawn each morning. Nothing, including work, brought her joy. Her friends, family, and even God seemed a million miles away. Thinking that she might be sick, she had seen Dr. Poole, a young, kind family physician who had heard Beth’s story, asked some questions, and ordered some lab tests. The next day, Dr. Poole had phoned Beth. “All of your lab work looks okay,” she said. “Your thyroid and vitamin levels are normal. But you are depressed. Let’s talk about what might help.”

Depressed wasn’t a word that Beth, as a committed Chris­tian, expected, or wanted, to hear. No one in her family had ever been depressed. (She remembered that her grandmother had rarely left the house for months after her grandfather died, but no one really talked about that.) No one talked about depression in her college Christian fellowship. Most of the songs and Scriptures she heard at church were about how Christians should give thanks and be joyful. But a doctor had told her that she was depressed. What did that mean?

A week later, Beth sat in the office of Elaine, a Christian psychologist whom Dr. Poole had recommended. Beth had been nervous about the appointment, but Elaine’s warm and friendly style immediately put her at ease. It felt good to be able to talk with someone who listened and cared. After they had spoken for a while, Beth asked her what it meant that she was “depressed.”

“Depression is a curious word,” Elaine responded. “People sometimes use words like depression and clinical depres­sion as if it’s something that you get, like influenza or diabe­tes. But major depression is actually defined very broadly. If you feel unusually sad or joyless for at least two weeks, and also experience appetite changes, exhaustion, feelings of guilt, difficulty concentrating, difficulty sleeping or sleeping too much, or thoughts that you might be better off not alive, there’s a good chance that you’d meet the official criteria for depression. But not all depression is the same. For some peo­ple, depression can come seemingly out of the blue and can be so debilitating that people have a hard time getting out of bed or feeding themselves. For others, depression happens when people go through major life changes or a loss of some sort. For others, depression names the experience of living under intense chronic stress. For others, it’s something else entirely. For most, it’s a mix of a lot of things.”

A Physical, Relational, and Spiritual Challenge

Beth felt confused. “But what about me?” she asked. “Isn’t this something that’s happening in my body? Dr. Poole told me that depression was a medical condition, and that I might need medication for it.”

“Well, sure,” Elaine responded. “Your depression is happen­ing in your body because your life is happening in your body. And in your case, it may be that you’ve inherited some genes that make you more vulnerable to depression. But depression doesn’t have to do with your body only. It also has to do with patterns of thinking and acting that you’ve developed over years. You’ve told me, for example, of how all through college you worked so hard to appear perfect and fed off the praise of others, and now that you’re working, that’s a lot harder to do.”

Great Is His Faithfulness

“Wow,” Elaine said. “That’s a heavy load you’re trying to carry. I haven’t been … I should have been … this is all my fault. You speak as if anyone who feels like you do right now must be doing something seriously wrong in God’s eyes.”

Beth looked up, a little surprised. It sounded silly, but she did believe that, if she was honest.

“Do you know the hymn ‘Great is Thy Faithfulness?’” Elaine asked.

“Well, sure,” Beth answered. “We sang it all the time when I was younger. ‘Morning by morning new mercies I see …’”

“It’s a great hymn,” Elaine said, “taken from the Book of Lamentations 3:21-23. ‘His mercies never come to an end; they are new every morning; great is your faithfulness.’ But have you ever read the verses that come just before that?” She handed Beth a Bible that had been sitting near her desk, opened to Lamentations 3. Beth shuddered as she read the chapter: “He filled me with bitterness, satiated me with wormwood. He ground my teeth on gravel and made me cower in the dust. My soul has been deprived of peace; I have forgotten what happiness is” (Lamentations 3:15-17).

Beth closed the Bible and sat quietly for a moment before speaking. She was amazed that something in the Bible named what she was feeling so exactly. She wasn’t sure what all of it meant, but looked up at Elaine in amazement. “That’s it,” she said. “That’s how I feel.”

The next several months were hard, but Beth later regarded them as some of the most important of her life. She contin­ued to see Elaine weekly for talk therapy, focusing on her patterns of thought and action, and came to trust her deeply. She also met several times with a pastor at her new church, who prayed with her, and for her, and talked with her about her life with God. To her surprise, he even showed her sev­eral other Bible texts, like Psalm 13, Psalm 88, and Psalm 22 (a special psalm because it was used by Jesus himself on the cross in Matthew 27:46), which describe suffering that, in our time, could easily be labeled depression. She realized that even people who deeply loved God, and who were loved by God, could feel sad and low, and that God understood that.

She learned that being depressed wasn’t her fault. She learned that living with and overcoming depression was hard work — but not the sort of work that she could do alone. It required the hard work of being vulnerable before others and before God, of taking the risk to join a small group at her church, of paying more attention to her sleeping, exercising, and eating habits, and of setting limits with co-workers at her job. It required the hard work of trusting that God loved her and was for her even when she couldn’t feel God’s presence in her life. Though she never started a medication, she came to the point where she would be willing to do so if Dr. Poole had recommended it — and this willingness was freeing for her, since it meant that she was willing to receive help from oth­ers, rather than always having to keep things under control by willpower alone.

In the midst of all of this, as the gray winter gave way to the warm spring, Beth’s sadness gradually lifted, and she was grateful. But Beth didn’t consider herself “cured.” She still felt sad and bleak from time to time, and knew that the dark pit of depression could come again. But she knew that even if her depression returned, she wouldn’t be alone. •

WHAT TO DO IF YOU ARE DEPRESSED

Know that You Aren’t Alone. About six percent of Amer­icans meet the criteria for depression at any time, and 20 percent of us will be depressed during our lifetimes. That means that in a church of 200 people, about 12 are currently depressed and 40 have been depressed or will be at some point.

Get Help. If you think you might be depressed, talk to a trusted pastor and to a doctor, therapist, or counselor. There are good, effective treatments for nearly all forms of depression.

Pay Attention to Context. Some forms of depression have to do with bodily changes and come out of the blue, with little if any precipitating cause. But in most cases, depression is a signal that something isn’t right in our lives — maybe for reasons we’re not aware of or that are beyond our control. Don’t miss the opportunity that depression provides to pay attention to this — ideally in partnership with a trusted counselor.

Take Care of Your Body. Sometimes even fairly simple activity changes — like getting out of the house more, showering, eating more regularly, getting sunlight, sleeping at regular times, and exercising — can make a big difference.

Consider Medication. Many medications are useful for treating depression; they’re sometimes necessary and can be lifesaving. Because medications don’t usual­ly treat depression’s underlying cause, they should generally not be the only treatment used. But they can be very helpful in enabling someone to feel well enough to engage in talk therapy and other, more whole-person forms of treatment.

The most tragic consequence of depression is suicide. Though not all suicide is associated with depression, people who are depressed — Christians included — are about twenty times more likely to die by suicide com­pared to people without depression. If you’re depressed or know someone who is depressed and may be consid­ering suicide, here are some ways to respond:

Ask. If someone is depressed, it’s always okay to ask, “Have you had any thoughts about hurting or killing yourself?” You don’t need to worry about planting thoughts that aren’t already there.

Get help. Everyone who is contemplating suicide should be seen by a mental health professional, who will bring years of training into the situation. Don’t try to manage situations alone. If someone is actively contemplating suicide, do everything possible to make sure that some­one is staying with them. Bring them to a crisis center or emergency department, call 911, call the National Suicide Prevention Hotline at 1-800-273-TALK, or call your local mental health crisis hotline.

Love and befriend. You can’t “fix” someone’s thoughts of suicide, but you can always assure people that God loves them deeply, that you love them and care about them, and that you’ll not abandon them and will walk alongside them, even through the darkest of valleys. Keep checking in on someone who is depressed, even if they don’t always respond to your calls. Simple acts of friendship can go a very long way.

Warren Kinghorn, MD, ThD is a psychiatrist and theologian at Duke University. He is co-director of the Theology, Medicine, and Culture Initiative at Duke Divinity School. Growing up at Edwards Road Baptist Church in Greenville, SC, Warren now lives in Durham, NC with his wife, Susan, and their two young children.

This article originally appeared in HomeLife magazine (December 2015). For more articles like this