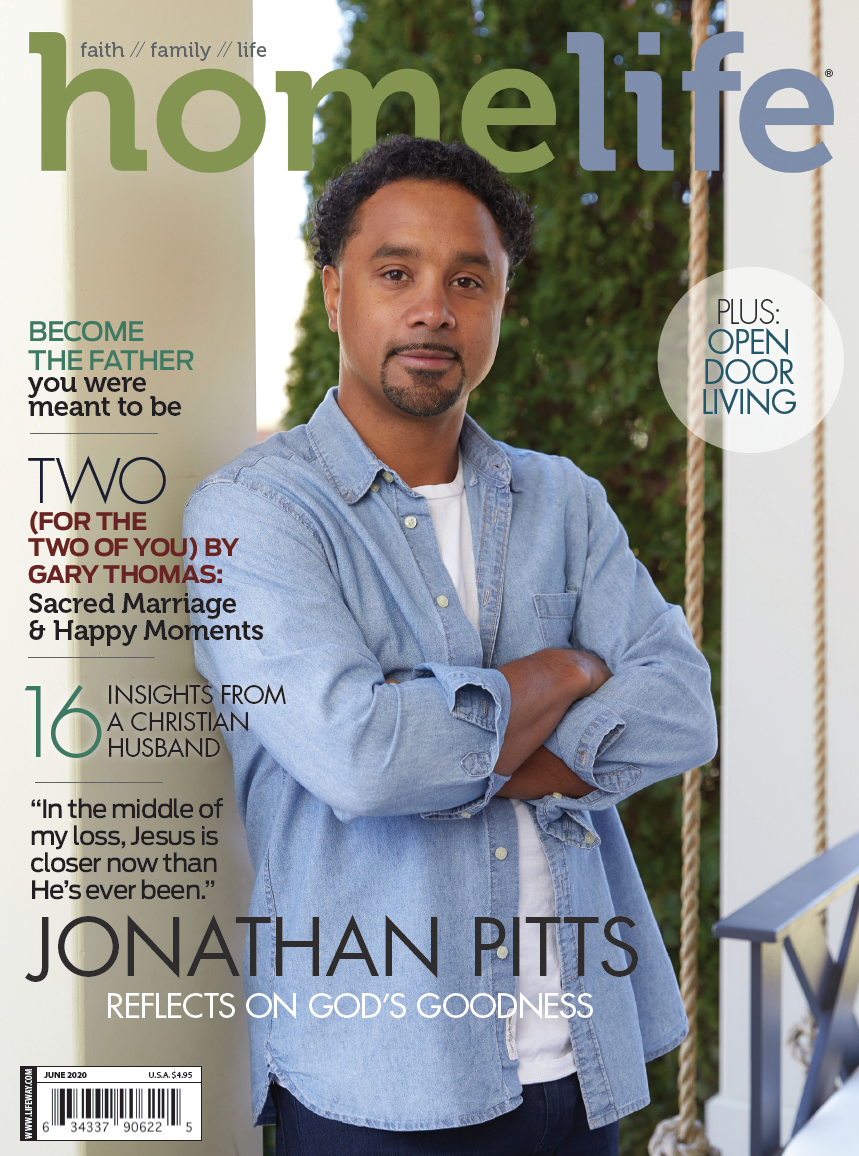 Jonathan Pitts reflects on the goodness of God.

IN THE SUMMER of 2018, Jonathan Pitts accepted God’s call to serve as the Exec­utive Pastor at Church of the City in Franklin, Tennessee. Jonathan, his wife Wynter, and their four daughters — Alena, Kaitlyn, and twins, Camryn and Olivia — would soon be pulling up roots and leaving their beloved home in Dallas, Texas.

For many years Jonathan had been the executive director at The Urban Alternative, the national ministry of Dr. Tony Evans. There, he had the privilege of working along­side Dr. Evans, who was Wynter’s uncle, and being mentored personally and professionally as they labored together. Life in Dallas, where they were surrounded by such a wonderful community of faith, would be hard to leave. But Jonathan and his family were eager to follow God’s call on their lives.

Before the big move, Jonathan and Wynter celebrated their 15th wedding anniversary. Their union was stronger than ever, and their first marriage book, Emptied: Experienc­ing the Fullness of a Poured-Out Marriage, was nearly finished. A road map for building intimacy through biblical principles, Emp­tied chronicles the joys and hardships of Jonathan’s and Wynter’s early years and the lessons learned as God wrote their love story.

For better or worse, and in sickness and health, Jonathan and Wynter found refuge in the grace and good­ness of God. Jonathan writes in Emptied, “My testimony is easily summed up and can be extracted from Psalm 34:8: ‘Taste and see that the LORD is good; blessed is the one who takes refuge in him’ (NIV). Even in the difficult, bad, and ugly, I’ve had the opportunity to experience God’s virtuous­ness. In the death of relatives and friends, I’ve seen His consistent hand of love.”

Following the Example of God

The upcoming book and new position were gracious gifts from a good Father. But His kindness didn’t stop there. The Pitts’ four daughters were happily growing in Christ, a prayer so close to Wynter’s heart that she’d created For Girls Like You magazine a few years before. Pouring herself out for her daughters, she designed the magazine using borrowed software, then moved on to books, devotionals, and prayer journals because resources for their age group were scarce. What began as a desire to help her children know and trust the Lord became an unex­pected ministry to tween girls, ages 6-11, all over the world.

Jonathan championed his wife’s minis­try and helped behind the scenes, enabling Wynter to focus on the creative process. Together, they produced Christ-centered resources for tweens and coauthored a parenting book, She Is Yours: Trusting God as You Raise the Girl He Gave You. So it was only natural for them to write a book on marriage, a time capsule of how far God had brought them.

One of the last items on their Texas to-do list was submit­ting the completed manuscript for Emptied. On the after­noon of July 24, 2018, Jonathan signed and turned in the final edited manuscript and came home ready to support his wife. She was gearing up for a long night of editing on her final project, I Am Yours: Prayers for God’s Girl. Wynter, having a knack for sensing when it was time to refuel, laid down for a nap. While his bride slept, Jonathan quietly cared for his girls, ensuring that Wynter would gain the needed energy for the project that was at hand. Four hours later, Wynter unex­pectedly passed away in her sleep.

Trusting in the Kindness of God

In a split second, Jonathan lost his best friend, his lover, and partner in life. Alena, Kaitlyn, Camryn, and Olivia lost their amazing mom and confidante, their greatest cheerleader and mentor. Inexplicably, at the age of 38, Wynter had passed.

On the most excruciat­ing night of his life, amid the cries of his daugh­ters and his own heart breaking, Jonathan took refuge in the promises of God. First, he reassured Alena, Kaitlyn, Camryn, and Olivia that their mother was with Jesus. He gave thanks for the 15 years and 27 days he was married to Wynter. Then he began to sing, comforting his children with hymns of praise.

In the days that followed, the presence of God surrounded them. Extended fam­ily and friends showed incredible kindness and sacrifice, reminding Jonathan and the girls how much God loved them. Arriving at their new house in Tennessee, they were welcomed by hundreds of cheering people from Church of the City. Folks they’d never met before devoted themselves to caregiving and prayer. Well-known child therapist and friend of Wynter’s, Sissy Goff, started pouring into the girls, and an executive and therapist on Jonathan’s team ensured that he would find healing. Jonathan reflects, “I thought God was sending me to use my gifts and skills to contribute to a church that was growing massively. But God was sending me first and foremost to heal. He dropped us into a family that has loved us so well from the moment we arrived.”

Leaning on the Grace of God

Since Wynter’s death nearly two years ago, the Pitts have inspired thousands of people. Firmly rooted in the truth of Scripture, their family has walked through grief without walking away from their faith. Jonathan shares, “We’re doing better than anyone would expect. God has really been good and kind. In Psalms 34:7, it says, ‘The angel of the LORD encamps around those who fear him, and rescues them.’ And I’ve found that to be true. As a widowed dad with four daugh­ters, God has provided so many different types of rescue.”

Jonathan doesn’t dwell on everything his family has lost. Rather, he praises God for his sister, Carmen, who volun­tarily left New Jersey to live with him and the girls. Having Carmen in their home means his children are blessed with a surrogate mother to soften some voids and provide comfort and guidance. He’s also grateful for Wynter’s aunt, who flies into Nashville every month and styles his daughters’ hair for free. The outpouring of care they’ve received from friends and relatives has truly been remarkable. That’s not to suggest that life has been easy. There are still plenty of hard days and breakdowns, whys and if onlys. But Jonathan and the girls are full of gratitude for the amazing life they shared with Wynter, for her legacy, and for so many good gifts from the God who encamps around them.

The Pitts children are doing well and already beginning to live out their parents’ legacy. Alena (16), who appeared in the movie War Room, is a gifted singer, speaker, and writer with a heart for the underdog. Known as the life of the party, Kaitlyn (13) embraces the joy of the Lord and is great at building relationships. Camryn (11), has a sense of con­fidence and strength that helps everyone push through hard things. Olivia (11), enjoys music and drama and is the dreamer of the family with a delightful imagination.

Jonathan sees Wynter’s qualities in each of his girls and acknowledges that they’ve demonstrated patience and grace when he stumbles. “It’s hard enough to be a parent. But when you can’t do it all, God steps in and fills in the gaps. There will be good days and bad days, and all we can do is draw near to God. The Bible says He isn’t far from you, that He can be found. He’s a Father to the fatherless and a Mother to the motherless. So I choose the perspective that is true: I place my hope in Him and rest in the Lord, knowing I can’t do this on my own. God has to show up — and He does. In the middle of my loss, Jesus is closer now than He’s ever been.”

Serving the Purposes of God

Throughout their 15 years of marriage and raising a family, the Pitts’ core principle was never perfection, but intentionality. It enabled them to focus on things that mat­ter, like ensuring that their children fell in love with God’s Word and learned to walk fearlessly. Jonathan says, “Wynter’s minis­try was born from a need to find resources for our girls. God took that desire and multiplied it to bless thousands of others. That’s what can happen when you marry intentionality with God’s grace.”

Wynter never imagined how much God would do through her obedience. But Jonathan loves to tell others about the impact she had on him, on their daugh­ters, and on those she reached through her ministry. “When you invest in things beyond the scope of your own life and leave behind something that will bless even more generations, that’s a legacy. I wish we had more time with Wynter, but I trust that she’s exactly where she’s supposed to be. Acts 13:36 says that David served the purposes of God for his generation, and then he fell asleep. I’m fully convinced that Wynter fell asleep, having accomplished all the purposes God had for her.”

As he devotes himself to parenting and pastoring, Jonathan finds wisdom and strength from the deep well of God’s Word. He encourages his daughters to align their lives with a favorite promise found in Psalm 37:4, “Take delight in the LORD, and he will give you your heart’s desires.” And they’d love for your family to grow in Christ right along with them.

Holly Basham is a regular contributor to Lifeway’s Journey and HomeLife publications. She loves to spread hope by telling stories of God’s amazing grace. Holly and her husband, Kerry, enjoy Sunday lunches with their four grown children, scenic road trips, and long walks on sunny beaches.

This article originally appeared in HomeLife magazine (June 2020). For more articles like this