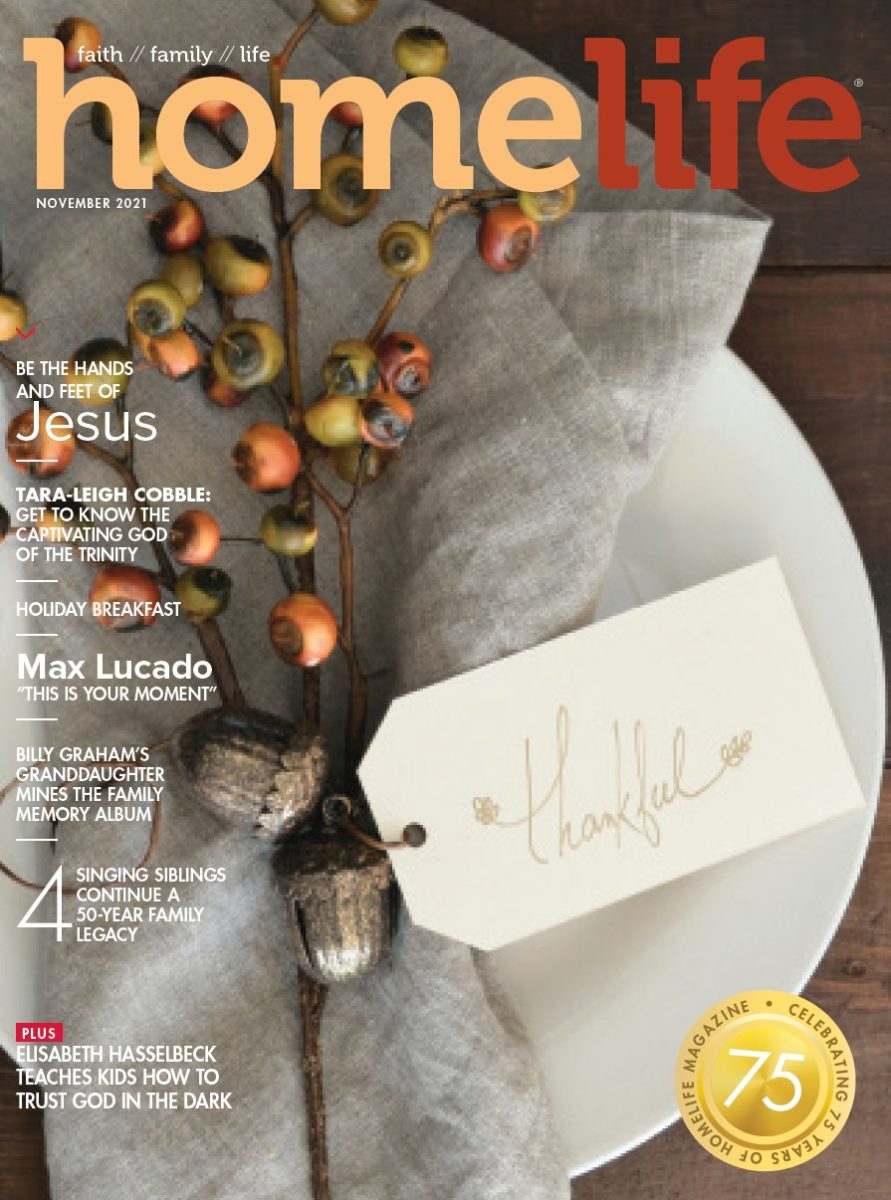 Model for your children something basic and profound about being created by Him and for Him.

AS A FATHER OF FOUR, ages 11 to four, I feel a sense of awe and gratitude that our generally unbelieving society pauses for a weekday each November formally dedicated to giving thanks.

It may seem like a small thing to most people. But for those with eyes to see, this is a striking ray of God’s common kindness in our day, even as we grieve the public sin and unbelief that can seem to surround us in other ways.

We actually pause to give thanks. But thanks to whom? Whatever conversation that question might prompt with neighbors and coworkers, the Thanksgiving holiday is at least an especially rich opportunity for dads and moms of little kids.

Now, to be sure, if practicing thanksgiving in our homes happens only one day in 365, then our children will not be much better for it. But if this one day is a springboard, an annual emphasis and rekindler that feeds a regular theme and practice in our families, then we have in this one day an occasion to highlight one of the most important realities God calls us, as parents, to teach our sons and daughters.

Honor God by Giving Thanks

When we ourselves give thanks to God, out loud for our chil­dren to hear, we model for them something very basic and profound about being human, created by God and for Him.

God made us “in his own image” (Gen. 1:27), and what do images do? They image. They reflect, display, make visible. God made us to reflect Him and display Him in our world to each other. We image Him through visible actions, with accompanying audible (or written) words that give meaning to those actions, which is why thanksgiving is so basic and so deep.

In Romans 1:21, the apostle Paul gives us this revealing glimpse into what has gone wrong in humans because of sin: “For though they knew God, they did not glorify him as God or show gratitude.” At one level, our plight in this world is remarkably simple. God made us and surrounded us with a world teeming with good: warm sunny days, beautiful blue skies, green grass, stunning cloud formations to dazzle the eye and provide shade, trees bearing mouthwatering fruit, and the greatest wonder of all in the created world — each other and the marvels that are human bodies and brains. Our world, even now under the sway of sin, is abounding with God’s goodness and kindness. And we ourselves have been given life and countless blessings, even in our most trying times. Our first response to God’s lavish provision, very basically, is to give Him thanks. To do so is to honor the One who made us and provides for us. But to not give thanks — whether from indifference or contempt — is to dishonor Him.

That’s the connection Paul makes in Romans 1: To give God thanks is to honor Him, and to honor Him — which is our very design and calling as humans — includes giving Him thanks. Ingratitude is no minor vice. And thanksgiving is no insignificant act.

Made to Give Thanks

Yet we find ourselves, with a call to parent the next genera­tion, living in times that celebrate pride rather than humility. The sense of entitlement in our generation is off the charts and increasing. Will Thanksgiving be a small thing for our children? Will they assume grace, God’s provision, blessing, resources, ability, and community? Or will they assume little and thank much? Will they grow up in a home in which thanksgiving happens daily, even as Thanksgiving comes only once a year?

In the end, we as parents want to model for our children, despite our many failures, what it would be like for God Himself to live as human. And when He did, He too gave thanks.

Even as God Himself, Lord of heaven and earth, Jesus embraced the fullness of the humanity He took at that first Christ­mas, all the way down to the basics of our flesh and blood, including thanksgiving.

He thanked His Father in prayer (see Matt. 11:25-26; Luke 10:21). When He fed the four thousand, “He took the seven loaves and the fish, gave thanks, broke them, and gave them to the disciples, and the disciples gave them to the crowds” (Matt. 15:36). When He fed five thousand, He began by giving thanks (see John 6:11). So memorable, in fact, was His giving thanks to His Father before breaking the loaves that later the location where the miracle occurred was referred to as “the place where they had eaten the bread after the Lord had given thanks” (John 6:23).

For Jesus, the God-man, giving thanks to His Father was no small thing. Jesus was the supreme human giver of thanks. Nor should giving thanks be small for us or our children. What an honor and joy to not only taste for ourselves the pleasure of giving God thanks, but also to model it for our children!

David Mathis is senior teacher and executive editor of desiringGod.org and a pastor at Cities Church in Saint Paul, Minnesota. He is a husband and father of four and author of Humbled: Welcoming the Uncomfortable Work of God.

This article originally appeared in HomeLife magazine (November 2021). For more articles like this