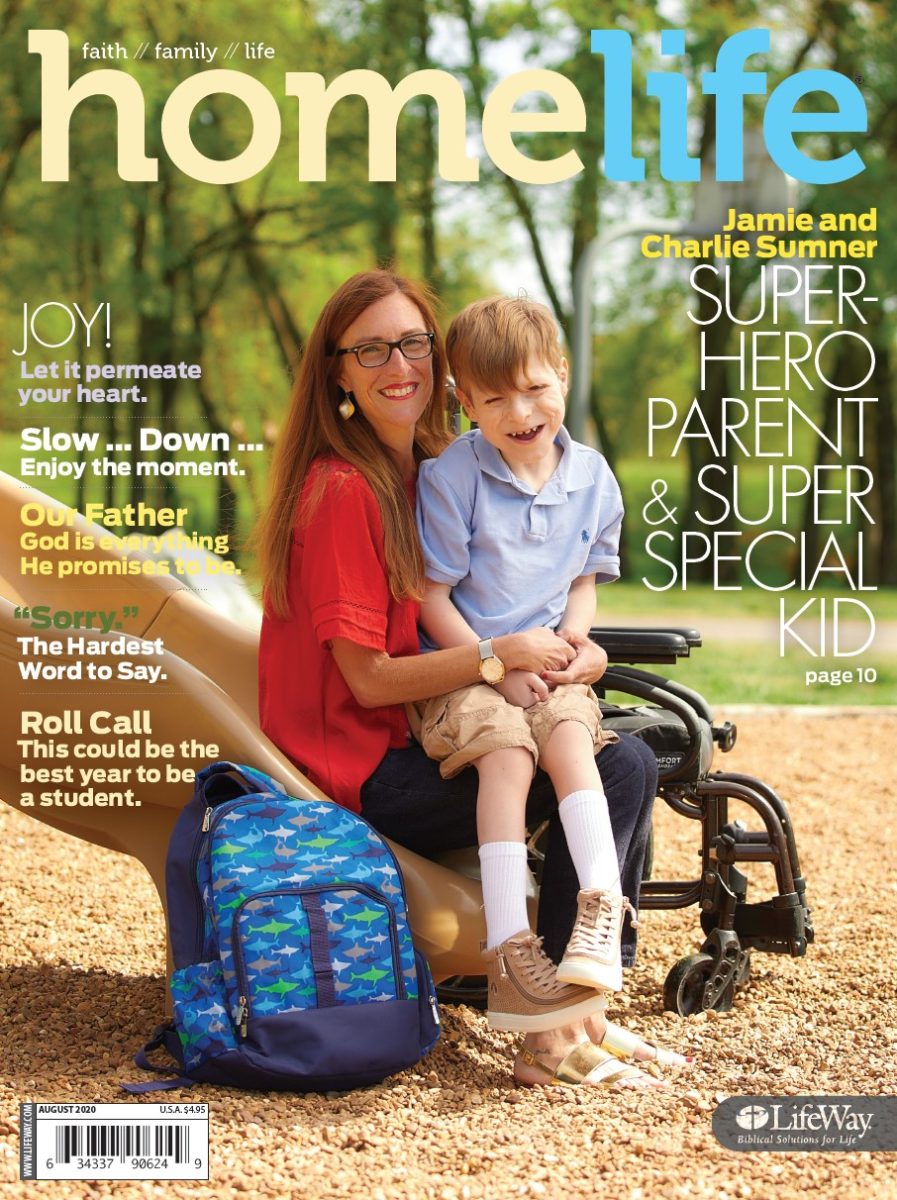 God’s Word is reliable, His church is alive, and He is everything He promises to be.

THESE ARE TRYING TIMES in the life of our church body.

Belief trends continue to reflect discouraging numbers across the country. Cynicism persists despite how we collectively try to shake it. And now there are long-term affects of the coronavirus, which call for confusing and imprecise pivots from the church that can begin to wear us out.

To all those who may be growing weary in well-doing, may we interrupt this otherwise stressful time with the following reminder: It’s all true. God’s Word is reliable. His church is alive. He is everything He promises to be.

Just ask acclaimed singer/songwriters Brad + Rebekah, who recently renewed their minds on this matter courtesy of the most jarring diagnosis of their lives. The diagnosis included words like inoperable. And cancer.

The cancer came to light after Rebekah gave birth to the couple’s second child and Rebekah began to notice that her own health wasn’t bouncing back like it should. After more than a year of doctor visits in which Rebekah received repeated assurances that all was well, the face of one follow-up nurse looked … different.

“Her demeanor changed ever so slightly,” says Rebekah, who had been working on a new song, “Rejoice,” with her husband against the backdrop of Philippians 4, which features phrases like, “Rejoice in the Lord always. I will say it again: Rejoice! Let your graciousness be known to everyone. The Lord is near” (vv. 4-5).

“It was like a bucket of cold water,” recalls Rebekah of the bomb­shell news that she had cancer. After her nurse’s changed demeanor, her doctor met with her later in the middle of a noisy hallway and, speaking resolutely, explained that she had an inoperable, cancerous tumor wrapped around her kidney.

“I processed it in chunks. Cancer. Inoperable. He asked if I had any questions. I wasn’t even capa­ble,” she says. What she honestly was hoping in that moment was that someone would tell her it was a night­mare and that her husband would wake her up any minute.

Her husband felt the same. With his wife’s health needs well beyond his human capacity to fix, Brad took up the tasks of the job at hand. “I’m a detail person, so once we knew what we needed to get done, that was my solace. There were flights to book, doctors to speak with, insurance to handle,” Brad recounts.

Brad and Rebekah were wrapping a years-long project where they interviewed pastors across the country and asked several questions to find out what churches needed from their worship music. “We had wanted to do something that was a blessing to churches,” says Brad of the music they had developed from their research. “But we realized real quick that these songs would be a gift from God to us.”

Brad said a poignant message from pastors across the board was about identity — that we must understand our own identity and then understand our place in relation to God. Brad and Rebekah were about to have their identified place in relation to God tested through a harrowing expe­rience that would make them weep even while illumining, decisively, that it was a place to rejoice.

But that was a process.

Their experience began to look like a story out of Scrip­ture, with this family trying to find their way, hold on to God, and understand what to do next — minus the final page outlining for them here’s how this ends. A grueling period of awaiting an outcome can unmove anyone emotionally. “It was a roller coaster of peace and anxiety,” says Rebekah. “I had to reign in my fear. I was thinking, I don’t want to leave my family. I don’t want to leave my children.”

At one point in her wrestling, Rebekah’s mom gave her this sage advice: Dig a well.

“I tried to do that, writing Scriptures on peace and sov­ereignty. But there were moments I just couldn’t,” Rebekah recalls. “Just overcome with fear and anxiety, I’d look at my mom and ask her to read these Scriptures over me.”

Despite the tension, both Rebekah and Brad experienced God’s peace and sovereignty along the way with significant and personal signposts that helped to keep them going.

“There were little things along the way that held me steady,” marvels Brad. “Some of it was totally unrelated to the diagnosis. God took care of some financial stuff that was on our hearts, for instance. All those little things spoke to me.” The two felt compelled to hold on to the fact that if God was caring for them in small ways, they could also trust Him with the big diagnosis they had received.

“We tried to walk it out the best we could each day,” says Brad.

God Gives Us Others

Brad and Rebekah’s song, “Rejoice,” spoke to the trying experience they were facing personally right then. They knew they were called to rejoice, for indeed the Lord is near. Pain and anxiety were working to overpower them from rejoicing in God’s closeness, as would be the case for any one of us. Yet, we’re assured that the Christian faith battles fear in sometimes inarticulate, yet palpable ways. One way that happened for Brad and Rebekah was seeing it lived out in the church body.

During this period of time, the couple did two release concerts. Their concerts redirected them right back into the presence of fellow believers — several churches they had known well and served prior — who surrounded them personally and ensured the two that in this time, the church was covering them.

The concerts turned out to be a blessing to the couple in a way they hadn’t necessarily registered until they were in the middle of the gift itself.

“I looked out at that community during our concert, and there they stood. Rejoicing,” remembers Rebekah. “We look back at all we’d been through and how foolish in the middle of the trial we would think, Now it’s time to give up?”

“We just constantly reminded ourselves of that,” she says.

God Is Always with Us

In the middle of their trying times, the couple found out that the tumor was in fact operable. Not long after that, Rebekah went in for a surgery that was scheduled to take eight hours, but was successfully completed in two.

Consistently throughout the entire ordeal, Rebekah had prayed language that was personal to her. “I don’t know why in my prayers I kept using the phrase, ‘Lord, cause it to fall out,’” Rebekah confesses. But after surgery, when her doctor was debriefing her on her subsequent prognosis, he used an interesting phrase.

That led Rebekah to experience extraordinary intimacy in her relationship with the Lord. “My thoughts are nothing compared to His goodness,” she says. “I will worship. I have to be stubborn about my decision to do that. It’s a choice.”

That choice is something all Christians can relate to. One can worship, even while walking out the complexity of a life in faith, and likewise maintaining and facing the practicalities of life on earth, which still, regularly … hurt.

“To be honest with you, we have more than a few people we know who were diagnosed and then a short while later were gone,” Rebekah reflects. “What I do know is that when the end comes for us, we’ll be overwhelmed by His glory and that it was a fight in which we could know, grateful, that He is full of love.”

What continued to fuel that strong faith Brad and Rebekah had while in the trenches of their personal ordeal?

That it is all true. His Word is reliable. His church is an alive and willing community of edifying believers. And, “He is a good and loving father,” declares Rebekah. “No matter what that looks like here. No matter what happens, He is still worthy of our worship.”

Today, in remission and feel­ing healthy and well, Rebekah can reflect on how God is communicating that promise to her all the time, even in less dramatic stories for her family.

“Not long ago, I was crammed in the back of our car with my kids, traffic was crazy, and my daughter was closest to it — I felt myself get really frightened,” said Rebekah. “I felt the Holy Spirit let me know, ‘she belongs to me.’ She was His first.”

“That spoke a lot of things to me. We belong to Him.”

That speaks a lot of things to all of us. Yes, data trends are real, and cynicism is noteworthy, and Covid-19 fallout is a legiti­mate task at hand, but none of that rewrites who God is and what we are to Him.

It is all true. In that we can rejoice.

Janelle Alberts is a freelance writer and has written for Christianity Today and RELEVANT online publications. Her first book, Honest Answers: Exploring God Questions With Your Tween, preps parents on how to tackle hard questions with their tweens using pithy Q&A’s. It can be found on Amazon.com.

This article originally appeared in HomeLife magazine (August 2020). For more articles like this