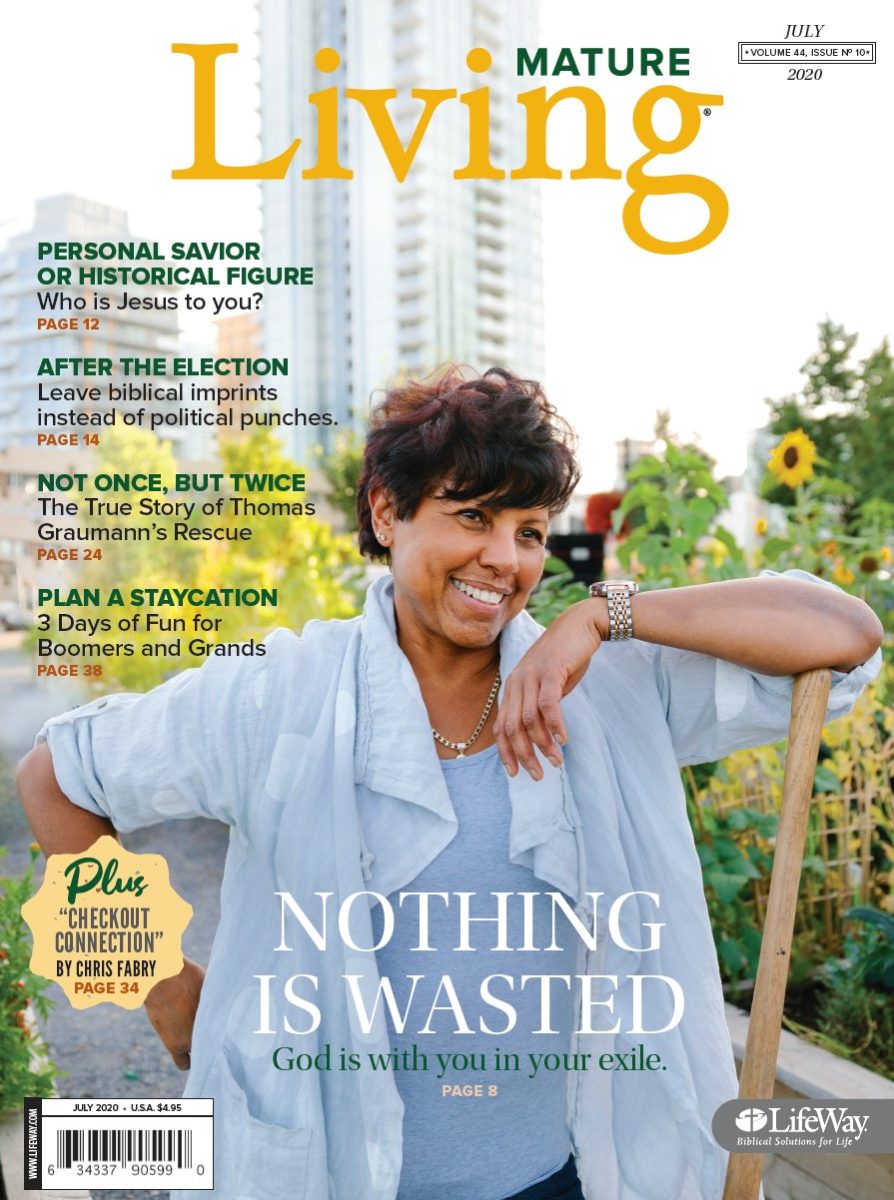 Where is God in My Exile

FEW YEARS AGO, my sweet southern daddy and I walked down to the beach.

On the outside, my almost 80-year-old father was a small man. He didn’t stand too much taller than I do — and I’m only 5 foot 2. But, on the inside, he was a giant. He was my source of wisdom, my example, my cheerleader; in short, he was my hero.

And when my world became dark with blindness as a 15-year-old girl, I relied heavily on my dad’s guiding touch to keep me physically oriented. He was the one I felt most secure with. His hand was always steady, his touch always gentle, and his pace always perfect for me.

But that day on the beach, I was the one who attempted to steady his wobbly frame as we headed to the shoreline. My dad had fought illness for a long time, and his body was tired and frail.

I knew the sickness had been hard on him, and I said, “Dad, I just admire your strength.”

It wasn’t long after that my dad closed his eyes here on earth and opened them in heaven. When he did, my whole world changed.

My brain knew what death was, but my heart was unaware that it was such a tearing and an emptying. Even after a few months, I felt like I was walking through fog. It just felt thick and like life was in slow motion.

My season of grief felt like exile. The security and grounding that came from my dad’s presence in my life were suddenly gone — and I felt insecure and lost without it.

We All Experience Exile

We all experience seasons of exile, in one form or another. It may be relational, geographical, or physical. Exile is anytime you feel removed from the familiar, disenfranchised from what made you feel secure, and banished from the stability you once felt.

In the Bible, the Jewish people experienced several exiles. In each one, they were removed from their land, taken to a foreign land, and stuck there.

The Book of Haggai begins as one of their most famous exiles ends. It started in 586 B.C. when King Nebuchadnezzar invaded Judah, destroyed the temple, and hauled them off to Babylon. During their 70 years there, the Jewish people wept and longed for home.

And that’s often how we feel when we find ourselves in exile, right?

For me, my dad’s death brought relational exile. Maybe you’re stuck here too. You find yourself alone because the one you loved died or the one you married left. The kids you raised are no longer home and rarely call. Or perhaps you’re in a marriage, and you feel overlooked and unseen. You’re living in a foreign land of isolation.

Or you may be literally in geographical exile. You’ve moved to a new city, and you don’t know anyone. You don’t have the friends anymore that you once had, and you’re lonely.

It’s possible, like my dad’s illness or even my blindness, that your exile is physical. You’ve been diagnosed with a disease or developed a chronic illness, and you feel isolated. Maybe you’re battling anxiety or depression. As a result, you feel removed from the normal life you used to live and secluded from the joy you once had.

Exiles vary, but what they have in common is they are hard, unwelcome, confusing, and often test your faith. But in your exile, you can take courage. Because even in hardship, God is with you, and He will accomplish His good purpose for you.

God Is With You

Before Haggai spoke encouragement to the discouraged, but now-at-home Jewish people, another prophet named Jeremiah wrote them a letter while they were still in Babylonian exile. We can read it today in Jeremiah 29. In it, Jeremiah reminds the exiles that God promises He has good plans for them — “plans for your well-being, not for disaster, to give you a future and a hope” (v. 11).

The same is true for you, even if it doesn’t feel like it right now.

You may not know the reason for your exile. We live in a fallen world, and life just happens. But while you may not understand the meaning behind it, there’s something you can be sure of — God wastes nothing in your life.

Even in exile, God is giving you a hope and a future. He has plans for your welfare, even when it doesn’t feel well or fair. His plan isn’t for your calamity. God’s plans are to bless and prosper you, not to harm you.

When you hold on to this truth, you can take courage even when the landscape of your life seems dotted with the rubble of hopelessness. You know that you’re not alone. God is with you, and He will give you the strength to not only rebuild what’s broken but also to construct new things during your exile.

You may be holding your breath right now, waiting for your exile to end. But instead of trying to hurry it up, participate with it, and invest in it. Use it as a time to grow and increase in your faith. That’s what God told the Jews to do in Jeremiah 29:4-7.

Your exile does have an ending. Until it is over, though, you can hold on to the promise of Jeremiah 29:11, trusting that God has a hope and a future for you, no matter what. Your exile won’t last forever, but God’s faithfulness will.

So take courage in your exile today. God is with you.

JENNIFER ROTHSCHILD is a nationally known author, speaker, and Bible study teacher who has written 17 books, including the bestsellers Lessons I Learned in the Dark and Me, Myself, & Lies. Her newest video-based Bible study, Take Courage: A Study of Haggai, releases in July 2020.

This article originally appeared in Mature Living magazine (November 2019). For more articles like this, subscribe to Mature Living.