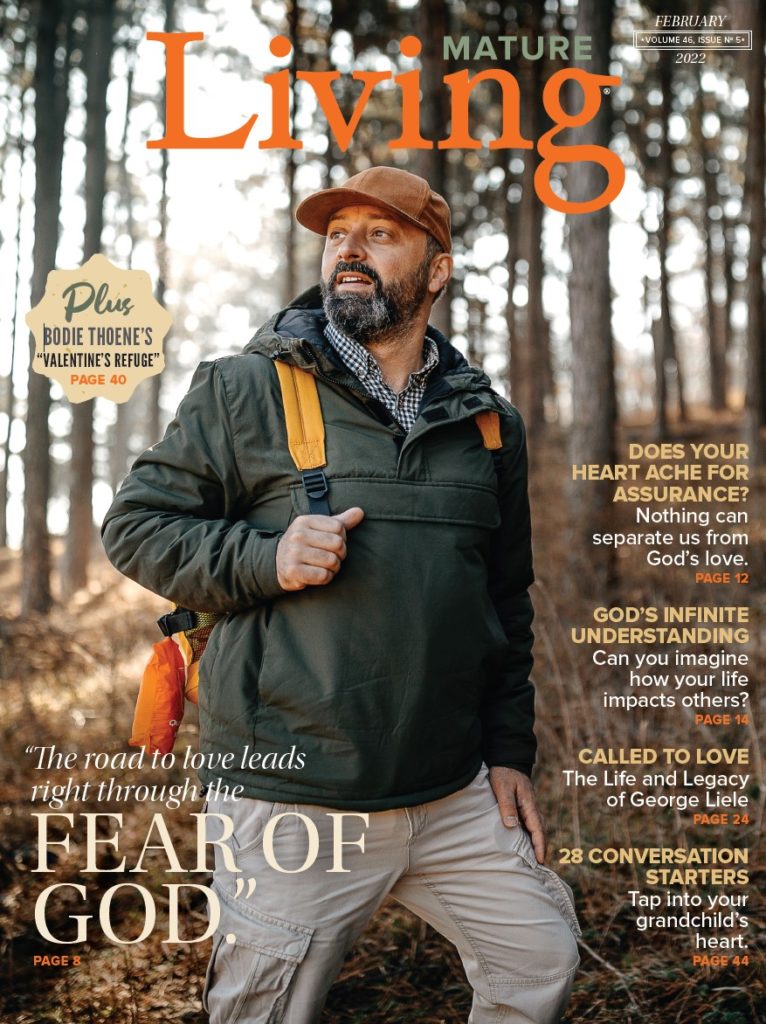 Because of God’s expressed love, we can rest in His arms.

DO YOU KNOW WHAT a “trust fall” is? It’s a team-building exercise where one person stands on an elevated platform, crosses her arms across her chest, closes her eyes, and falls backward into the arms of her teammates.

Our daughter had gone through an exercise like this in college and decided to bring it home. She would sporadically spin around in the kitchen and yell, “Trust fall!” and then without hesitation, fall backward into her dad’s arms. She knew beyond a shadow of a doubt that her dad would catch her, because she knew two things about him: his strength and his love. In other words, she trusted him because she knew him.

Trusting someone requires knowing him. It’s no different with God. We won’t trust Him if we don’t know Him — and we know Him by knowing what He has said (His words) and what He has done (His actions).

That is to say, we know God by knowing His Word. The Bible is the record of both what God has said and what He has done. For example, in Exodus 34:6, the Lord said He was “a compassionate and gracious God, slow to anger and abounding in faithful love and truth.” And then throughout the rest of Scripture, He showed us this was true through what He did. He faithfully pursued His people, forgiving them again and again, showing them great compassion, mercy, and love. Ultimately, He showed us the extent of His mercy and grace through His greatest act of love — sending His Son to rescue, redeem, forgive, and restore us to Himself through His life, death, and resurrection.

Words and actions. Both are important. Our triune God has gone out of His way to not only accomplish our salvation but to assure us of our salvation. And we would be hard pressed to find a place more laden with assuring promises than Romans 8. Take some time today to read the whole chapter. It’s beautiful. It lifts our eyes to see the glorious love the Father has poured out on us, the power of Christ in us, and the ministry of the Spirit for us. The chapter ends with “Who can separate us from the love of Christ?

Can affliction or distress or persecution or famine or nakedness or danger or sword? … I am persuaded that neither death nor life, nor angels nor rulers, nor things present nor things to come, nor powers, nor height nor depth, nor any other created thing will be able to separate us from the love of God that is in Christ Jesus our Lord” (vv. 35-39).

God has given us these words, these promises, to assure us. He’s saying that He loves us in such a way that nothing could, or will, ever cause Him to forsake or turn away from His people. Don’t you long for that assurance? I do! We need to know that God’s love is fixed, steady, sure, and trustworthy. Our hearts hunger to know that our salvation is sure and that we are eternally safe before the throne of God.

Not only does God give us these assuring words, but also a few verses earlier, He reminded us of what He has done to prove His words are true: “He did not even spare his own Son but gave him up for us all. How will he not also with him grant us everything?” (v. 32). God has already given His one and only Son for us. Of course He loves us! Of course He won’t let anything separate us from Him. Of course He will see our salvation all the way through to the end, to that glorious day when we will see Him face-to-face. Nothing, not even death, will separate us from His love.

In the same way our daughter could fall into her father’s arms because she knew beyond a shadow of a doubt that he loved her and that he was strong enough to catch her, you can fall into your Abba Father’s arms. He is strong, He loves you, and He will catch you every single time, both now and throughout all eternity. Your Father is trustworthy. Rest assured.

COURTNEY DOCTOR (MDiv, Covenant Theological Seminary) serves as coordinator of women’s initiatives for The Gospel Coalition and is the author of several Bible studies, including In View of God’s Mercies, available at lifeway.com/mercies. Courtney and her husband, Craig, have four children and five grandchildren.

This article originally appeared in Mature Living magazine (December 2022). For more articles like this, subscribe to Mature Living.