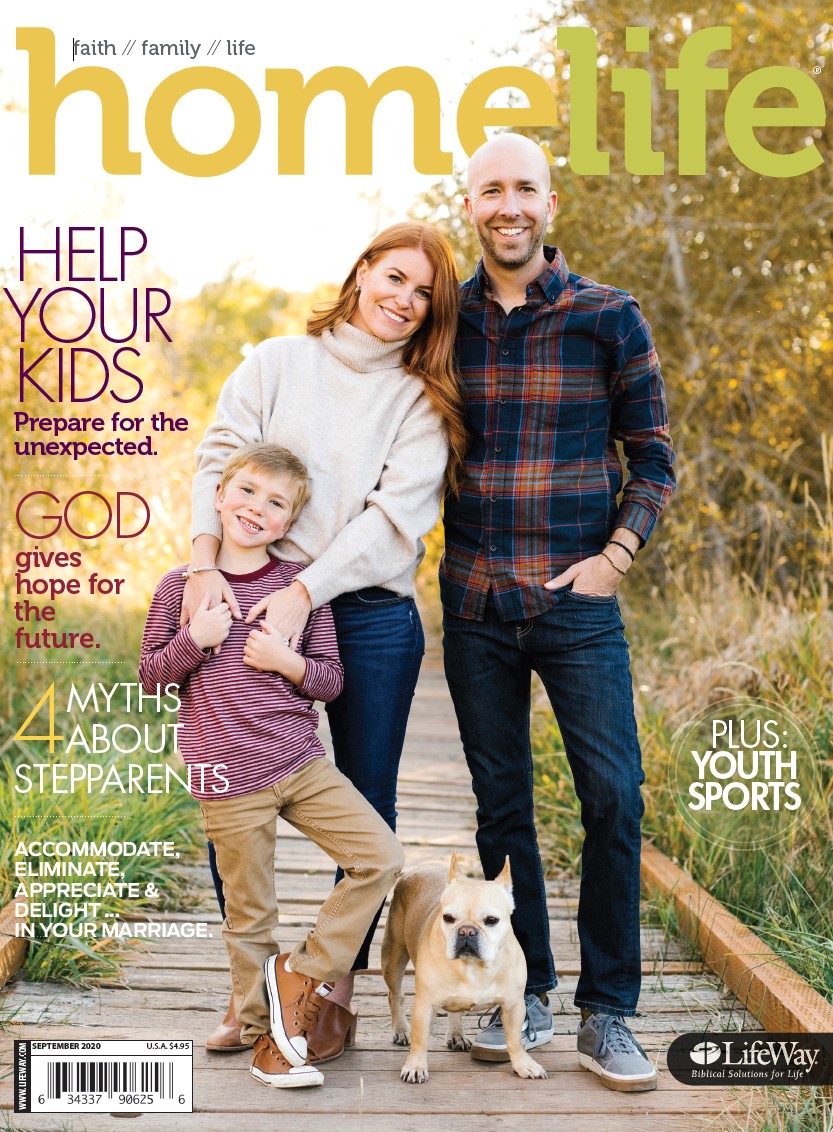 MY FIRST MEAL IN OXFORD, ENGLAND, was a spaghetti dinner with Jason and Tamy Elam, friends who had become family. This couple had taken me in during my college years and treated me like a family member. They had recently taken their six children to Oxford so Jason could pursue additional studies at the Oxford Centre for Christian Apol­ogetics. They were there to pick me up when I landed, and I was looking forward to spending another season of life with this family I had come to know and love for more than 10 years.

Jason had a long and successful career in the National Football League and tried regularly to set me up with friends and teammates. While I appreciated this, I was always too shy to date — though too guarded and unhealed is probably a more accurate way to describe it. And so a decade into our friendship — or what I like to call our “familyship” — Jason knew that telling me he had someone in mind for me would probably cause me to run in the opposite direction. In fact, my nickname in the family became “Gazelle,” as I ran fast from the opportunity to be known intimately.

Following our nice, long catch-up over spaghetti, the Elams had a friend casu­ally drop by and join us for dessert. This was unexpected to me, but not surprising. Jason has friends all over the world, and I figured this was just another friend joining us.

I looked up from the red-and-white-checkered tablecloth as we gazed at our dessert menus and saw a tall man standing at the end of the table. He had dark hair and a gleam in his eyes. He looked about my age, but by the way he carried himself, he seemed far more sophisticated than someone in his early thirties. His black suit with a red power tie made me think he was a politician. He had just come from listening to a speech at the Oxford Union, and he introduced himself with a humble Texas accent.

Who is this man? I thought to myself.

I was intrigued, but not interested. I felt uncom­fortable when Jason told him my name. I’ve always been far too embarrassed about my name — because I always thought it sounded like an old name for a young woman. On the inside, I was also  ashamed of my story and quite sure that no one in his or her right mind would be interested in me.

As we lingered at the little Italian restaurant, I learned more of this new man’s story. He had recently left the United States Air Force and was taking a year to study theology at Oxford University. He was attending the same college at Oxford that I was about to attend and was a classmate of Jason’s. I later found out that Jason intentionally invited Joel — that was his name — to join our meal, hoping the two of us would hit it off. We did, and we enjoyed each other’s company as we talked late into the evening.

Just one week later, Joel asked Jason’s permission to date me. This was important to me, a former orphan, and that eve­ning Joel took me to dinner and asked me to be his girlfriend. He was very intentional and so kind. Without knowing my full story, Joel captured my heart quicker than I knew it was available.

We dated for a year after meeting in Oxford and had a short six-month engagement before Jason performed our wedding. A year and a half later, we welcomed our first son. Today, I’m more in love with this man than the day I married him. Joel is an even better man than I originally thought. He is faithful. He is patient. He has restored my heart in areas I didn’t even know were desolate. He was the opposite of so much I’d experienced. He was steady when I was used to instability. He was consistent when I was used to unpredict­ability. He was faithful when I was used to abandonment. He was kind when I was used to cruel treatment. God used Joel Allen to give me a new name, and I’m grateful.

While Joel wasn’t the answer to my problems, my new name — Esther Allen — has brought me deep, unspeakable joy. This former independent, proud-to-be-single Esther Fleece became Esther Allen — Joel Allen’s bride. Embrac­ing my name change was a gradual process, and I think it happened in my heart long before it happened on an actual sheet of paper. The discovery of my new name was less about finding a husband and more about finding out I was loved, known, and desired — even before a ring went on my finger or I received my “MRS degree.”

The changing of our names signals that a change has hap­pened in us. This is precisely why God has new names for us and wants us to live out of these new names.

I had a new name and identity even before I met Joel; I just didn’t know how to live out of it confidently. In fact, I remem­ber God whispering this name, Bride, to me a year before I met Joel.

Many times God whispers a new name to us in anticipa­tion of a future season we will walk with Him. I spent time discovering what it meant to become the bride of Christ. Becoming a good bride for Him would prepare me to become a good bride on earth, and if that earthly name change never came, I knew I hadn’t wasted a second becoming a good bride to Christ.

My new name and your new name doesn’t come when we get married or when we achieve enough spiritual clout in our walk with God. Our first new name is Son or Daughter when we’re adopted by God and become His child forever. This makes a spiritual name change even more significant than a physical one. If you’re a follower of Jesus, you’ve been adopted into God’s family. You have new written all over you!

I know now I was given a new name by God long before I changed my name at the Social Security office, but I didn’t know how to discover or live into that new name. I don’t want that to happen to you. I want you to know your name from God, and I want you to pursue God and ask Him for it.

When we become followers of Christ, God makes each one of us a “new creation” (2 Cor. 5:17). He has made us to be ministers of a new covenant (see 2 Cor. 3:6). Often this new­ness is evident in our lives. We are empowered to pursue new life in Christ. He helps us clean up our language and make it new. God cleans up our hearts and makes them new. In many areas — from relationships to the ways we use money — we release the old way of doing things and embrace a new way. We understand what it means to be made into new people, but rarely do we pay attention to our new name.

Did you know that all of us who are in Christ have been given a new name? When we become a Christian, we imme­diately bear Christ’s name. Luke teaches that “the disciples were first called Christians at Antioch” (Acts 11:26). Later in the first century, Christians were called followers of “the Way” (Acts 9:2).

The word often translated “new” in the New Testament is the Greek word kainos, and The Holman Illustrated Bible Dictionary tells us that kainos means “different from one of the same which existed before; made fresh.” Some of us hear that when we’re in Christ, we become new creations, or we look forward to the new bodies we will get in heaven (see 2 Cor. 5:2). Or we are familiar with the term “new covenant” (see Jer. 31:31; Heb. 8:13; 9:15; Luke 22:20), found in both the Old and New Testaments. But why isn’t anyone talking about our new name?

When we know our new name, we’re remade as we live into the power of that name, and we’re no longer identified by the circumstances we’ve come from. We’re made new as

we’re re-identified by our relationship to God, and along with that comes a new name.

I took on an important physical name change when I went from Esther Fleece to Esther Allen, but I want you to know that God has new names in store for all of us. We’re never too old and it is never too late for a new name.

What is most true about us is that when we become Christ-followers we take on the new name of Son or Daugh­ter. God planned our adoption as sons and daughters through Jesus Christ, and it was His pleasure and will to do so (see Eph. 1:5). This means that if you’re a follower of Jesus, you’re a child of God with a new name. To all of us who receive God, and to those of us who believe in His name, He gives the right to become children of God (see John 1:12). Previously, I was an orphan, but now I have the name of Adopted. I exchanged the label orphan for the new name of Daughter, and it has made a world of difference.

It takes time to learn to live out of our new names, and there are more names for us than Son or Daughter. Some followers of God in the Bible were renamed completely — Abram to Abraham, Sarai to Sarah, Jacob to Israel. A few of us may receive a new name in that way. Others of us may keep our physical name while receiving a new spiritual name that empowers us to live the life God has for us to live. Some of us will be renamed according to who God is calling us to become in this world.

Some folks in the Bible were being called to live into their new identities as followers of Jesus. Men like Andrew, James, and John received not a new physical name but a new identity when they were called away from fishing for fish to fishing for people (see Matt. 4:19). Others — like Simon, whose name became Peter — received a new name. What is consistent is that after they met Jesus, they were known as Fishers of People, and this spiritual name changed how they lived here on earth.

How about you? What were you before you met Christ? Were you a rebel? Were you mistreated? Were you suffering? Were you forgotten? What labels have limited your life? What false names assigned by others have held you back? And what new name is God giving you?

Living out of our new names puts God’s name on display. It is never too late to be made new.

Esther Fleece Allen loves to connect people around the world to practical, faith-centered tools for living through every season, good and bad. Esther believes in the cathartic power of shared personal stories to teach, to inspire, and to comfort. She is a graduate of the Oxford Center for Apologetics and current seminarian. When she’s not traveling, speaking, or writing, she enjoys making a home with her husband and son. Learn more at estherfleeceallen.com, and share your own story with her at @EstherFleece.

This article originally appeared in HomeLife magazine (September 2020). For more articles like this