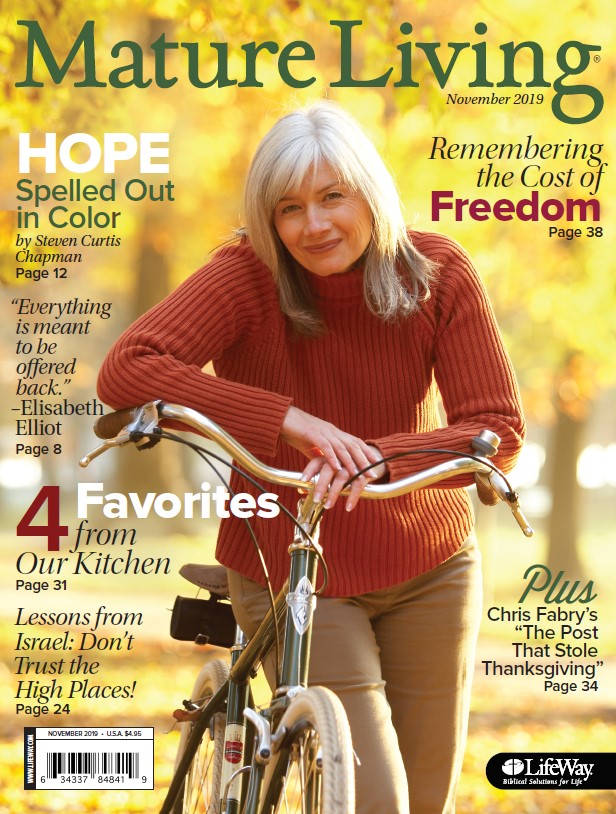 The Gift of Pieces

Your greatest offering may just be a broken sacrifice.

I REMEMBER WHEN I was a little girl wanting to buy Christmas presents for my parents and I had no way at all of earning money. My brothers had paper routes and earned maybe twenty-five cents a week or something like that back in the Depression days. But I had to depend on an allowance. So  I would have had absolutely nothing to give to my mother for Christmas if my mother hadn’t given something to me first. That’s the way it is with us with God, isn’t it? We are totally destitute.  Everything that we have comes from Him and we have nothing to offer except what He has given us.

There’s an old prayer of thanksgiving at the offering time. It goes like this, “All things come  of thee, O Lord and of thine own have we given  thee.” We receive it from Him. We accept it in our hands. We say thank You. And then we offer it back. This is the logical sequence of the things which I have been talking about. Everything is a  gift. Everything is meant to be offered back.

I have felt as if I was destitute like the widow of  Zarephath. You remember the story of how  Elijah was fed by ravens for a time and then  God told him that the ravens were going to stop.  And that he was to go down to a place called  Zarephath where there was a widow who would feed him. Now I don’t think we can begin to imagine the absolute dereliction of a widow in those ancient times. But she was the most helpless and poor of all.

Now why in the world would God Almighty,  who owns the cattle on a thousand hills, choose a  destitute woman to feed his prophet Elijah? And you remember that when Elijah reaches Zarephath he finds this woman out gathering a couple of sticks, and he asks her for a drink of water. And then he asks her for the most unreasonable request imaginable, and he says bake me a cake.

Well, if she were speaking modern English, she would have said, “Surely you’ve got to be kidding.  I’m out here gathering two sticks so that I can bake the last handful of flour and last few drops of oil into a little cake, which is the only thing that stands between me and my son and death. We are starving  to death and you ask me to bake you a cake.”

But the woman recognized that this was a man of God. So to her, it was a matter of obedience to  God to fulfill his request, so she baked him a cake.  She believed his word that the flask of oil would not fail, nor would the barrel of meal be empty. What had God done in sending the prophet to a destitute woman? He had put into that woman’s hands something to offer back. But what a pitiful offering.  One little handful of flour, a few drops of oil.

ONLY A LITTLE BIT

Do you remember when the little boy brought his lunch to Jesus (or the disciples extorted that lunch from him)? He had five loaves and two fishes which the disciples brought to Jesus and he put it into Jesus’ hands. One of the disciples even asked  Jesus what good that little bit of food could be for such a large crowd.

Now I’m speaking to some of you who feel as if you have nothing whatsoever to offer to God. You don’t have any huge sufferings, perhaps. You don’t have any great gifts. You were behind the door when they gave out the gifts and you feel like, poor me, I can’t sing and I can’t preach and I can’t pray and I can’t write books and I can’t be the hostess with the mostest. So I really can’t serve the Lord. If I had that person’s gifts then it would be a different story.

I don’t know who I’m talking to but I’m sure that there are some of you who would be saying, what is the good of my offering for such a crowd. You’re telling me that I have something that is going to matter for the life of the world? And I say, yes, that’s what I’m telling you. Because God takes a widow with nothing, God takes a little boy’s lunch and He turns that into something for the good of the world because that individual let it go.

I began to see, again very dimly. Please don’t imagine that I was some kind of spiritual giant to see this thing. It was the Holy Spirit of God that said to me, give it to Me. Let it go. Offer it up. A sacrifice. Something in your hands to give Me. How does a mother feel when her tiny little two-year-old comes into the house with a smashed dandelion clenched in his little, sweaty fist and he offers her the smashed dandelion? It means everything in the world because love transforms it. That’s what this is about. Suffering and love are inextricably bound up together. And love invariably means sacrifice.

Amy Carmichael, a single woman, became the mother of thousands of Indian children. There was a time when the family that she founded as a Dohnavur Fellowship — little children, rescued from temple prostitution — that family numbered over 900 people at one time. And she worked there for fifty-three years. And she wrote these words in one of her poems, “If Thy dear home be fuller, Lord, for that a little emptier my house on earth, what rich reward that guerdon2 were.” You and I have no idea what God has in mind when we make the offering. But everything is potential material for sacrifice.

Again and again, I’ve had people say to me, how do you handle loneliness? And I say that I can’t handle loneliness. They ask, “Well didn’t you spend a lot of time alone in the jungle?” I inevitably reply, “Yes, I did. I spent a good many more years alone than I did married.” They return, “Well how did you handle it?” To which I reply, “I didn’t. I couldn’t.

I have to turn it over to Somebody who can handle it.” In other words, my loneliness became my offering.

And so if God doesn’t always remove the feeling of loneliness, it is in order that every minute of every day, perhaps, I have something to offer up to Him and say, “Lord, here it is. I can’t handle this.” I don’t know what your emotions may be that you can’t handle, but I believe that every one of us knows something about loneliness. Singles always imagine that married people are not lonely, but I can testify that there are different kinds of loneliness.

I have never forgotten what a missionary speaker said in chapel when I was a student. We had compulsory chapel five days a week at Wheaton College. So we heard hundreds of speakers and remembered practically nothing of most of them. But I have never forgotten what this woman said. She spoke about the little boy bringing his lunch to Jesus. And she said, “If my life is broken when given to Jesus, it may be because pieces will feed a multitude when a loaf would satisfy only a little boy.”

What have you got in your hand to give to Him?

Excerpted with permission from Suffering Is Never for Nothing by Elisabeth Elliot. Copyright 2019, B&H Publishing Group.

This article originally appeared in Mature Living magazine (November 2019). For more articles like this, subscribe to Mature Living.