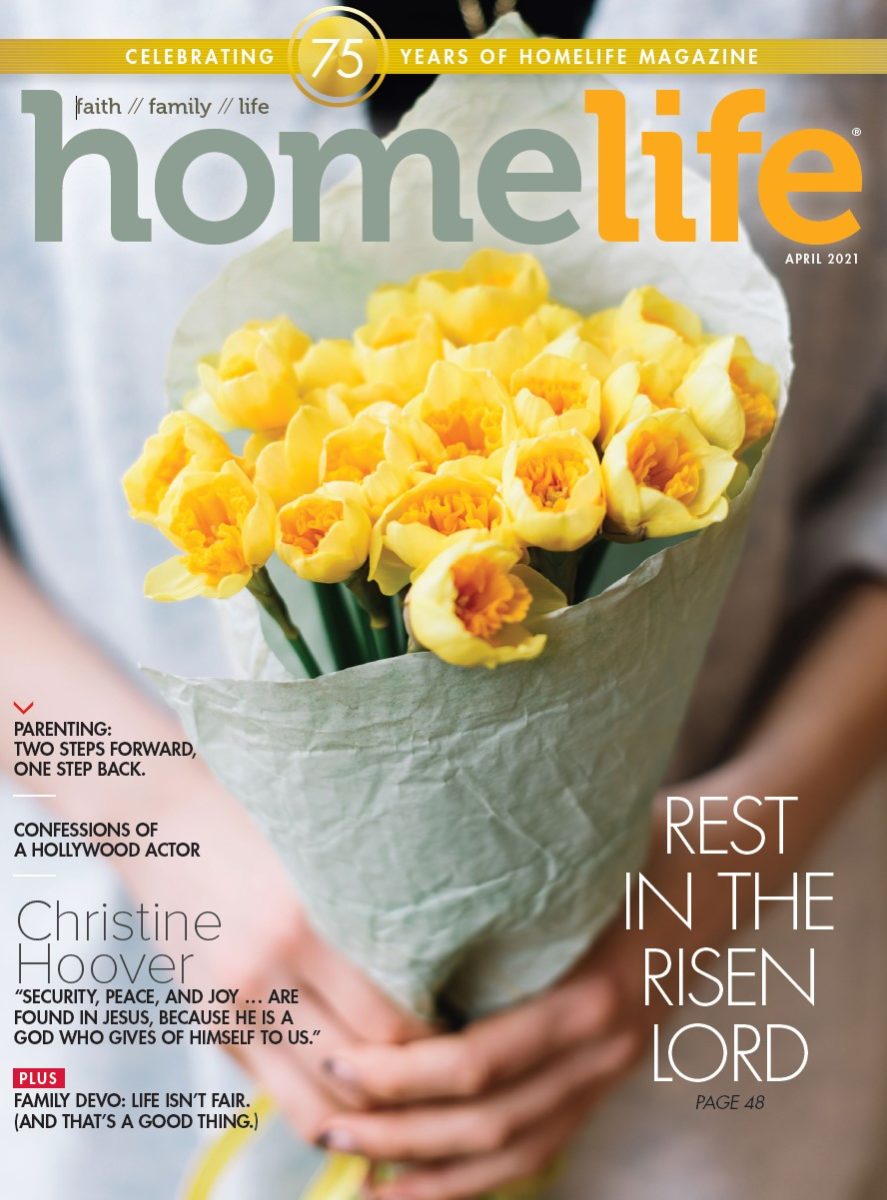 Resting in the Risen Lord

May the wonder and the promise of the resurrection be fulfilled in you.

LOVE HOW THE BEAUTY OF CELEBRATING Easter gets ushered in with the blooming of the daffodils and the mama birds building their nests inside the wreaths on our front doors. I’ve got to admit though that the birds outside our windows are usually nesting in the Christmas wreath I pro­crastinated about taking down! Let’s face it, time flies, and sometimes it feels like the seasons are starting to run together.

When it comes to seasons and celebrations, I can’t help but think of an old, 17th-century quote I love by John Donne. I actually wrote a song around the quote, which goes something like this:

that Christ be born in you,

and He who gave His life for you

will be with you all year through.

I know we’re celebrating Easter, but I think the quote still stands, don’t you? As believers in the risen Lord — if the

Spirit of Him who raised Jesus from the dead dwells in us — is it not Easter all year round? If so, we just went way beyond plastic eggs in an Easter basket to something very real and revolutionary. Beloved, we’re called to live the Easter story — and the Christmas story for that matter — every day of our lives!

I’ll never forget when God intercepted my life with this real and revolutionary truth. It’s been 15 years ago now, but it feels like only yesterday that He met me in the most peculiar way, in the middle of the most mundane task. I was cleaning a toilet! He had readied my heart for this moment; I just had no idea that a readied heart could look like an exhausted heart, or even a heart on the brink of burnout.

My husband, Nathan, and I were a Christian music duo called Watermark in those days, and we were busy touring year-round with our kids in tow. We loved all that we were getting to do, but I had personally hit a wall, because I was trying so hard to do it all. What was even worse was that somewhere along the way, singing for God had replaced sitting with Him. Doing things for God had become more important to me than living from Him. The results were running on empty and relying on my own strength and capacity to do all the things that I thought I was supposed to be doing for God. I can see it so clearly now — how my hustling and striving became the very thing that held me back from the life I was truly longing to live.

I wonder if you’re sitting there sighing with relief, even now, that you’re not the only one who feels the strain and stress of carrying all that you carry. Maybe you know what it feels like to “yes” yourself into exhaustion, or for your Christian life to be reduced to a checklist of things to do rather than you becoming who God made you to be.

I can’t tell you how grateful I am that the Lord will fight for places in our hearts that we have either given up or don’t even know need rescue. God met me that day while cleaning a toilet. Not only was it proof to me that He can show up anytime, anywhere, but it was also the beginning of Him teaching me how to reorder my heart around who He is. The encounter with God that day changed the trajectory of my life.

In reordering my heart, the Lord reminded me that He is a God of order. We can see it in the flawless work of His creation just as we see it all throughout His Word. In fact, in both the Old and New Testaments, one of the ways that we can see His order is that more often than not, God takes time to remind us of who we are before He commands us to do something.

A beautiful example of this is Colossians 3:12, where it says, “Therefore, as God’s chosen ones, holy and dearly loved, put on compassion, kindness, humility, gentleness, and  patience.” Can you hear the order? God reminds us that we have what it takes to do what He’s asking us to do because of who He’s made us to be. And who does He say that we are? We are His chosen ones, holy and dearly loved. I think sometimes we skim by those words as if it’s a meaningless salutation, but this is God reminding us once again of who we really are. Even more than that, whose we are.

As I wrapped my heart around my true identity in that season, I came face-to-face with my gospel story once more. Yes, it’s about the day that I first gave Jesus my heart, at the age of seven, but it’s also just as much about me living from my gospel story every day of my life. It’s about the freedom in admitting that I can’t do it all and that I have weaknesses and limitations in this life. In fact, I learned that Christ’s power could even be made perfect in those imperfections.

Paul said, “Therefore, I will most gladly boast all the more about my weaknesses, so that Christ’s power may reside in me” (2 Cor. 12:9b). Yes, there might be a hustle that holds us back, but isn’t it just like God to create a rest — a dependence upon Him for the strength that we need and the life that we long for — that propels us?

I recently discovered a tiny Greek word. This one might be little, but it packs a serious punch! The word is ek, and in Scripture, when you see the words “from God” or “of God,” it’s most likely translated from this mighty little word. According to Strong’s Concordance, “It’s actually one of the most under-translated (and therefore mistranslated) Greek prepositions — often being confined to the meaning ‘by.’ [It actually] has a two-layered meaning (‘out from and to’), which makes it outcome oriented (out of the depths of the source and extending to its impact on the object).”

So, think about it: When 1 John 4:6 says that we’re from God, this means that we’re out from God and to … to what? To everyone we will come in contact with today — from the carpool line to the cubicle at work. Beloved, you were made to live the Easter story from the inside out. When we see it for what it really is, we’ll celebrate the risen Savior in a whole new way. We’ll stand in awe that the resurrected Jesus lives in us and through us, to the world around us.

Jesus said, “Peace be with you. As the Father has sent me, I also send you” (John 20:21). I used to look at that verse and shudder to think that Jesus would send me as any sort of rep­resentative of His. I’d feel the pressure to perform and would skip straight to the striving to live how I thought Christ would live. In the end, I was missing the order of things. How did Jesus say that He has sent us? He declared peace over us, because He has sent us how God sent Him — with the full backing of the Father’s person, power, and presence.

Maxie Dunnam, in her book The Intercessory Life, puts it like this: You and I get to re-present Christ to the world!

Isn’t that beautiful? So, it’s not us trying with all our might to live like we think Christ would live; it’s us abiding and resting in the risen Lord so He can express His life through our own. It’s the beauty of His person shining through the personalities He gave us. It’s His very presence — presenting through us — the fullness of His love.

So, let us make good this Easter season. May we see to it that the wonder and the promise of the resurrection is fulfilled in us. And He who gave His life for us and rose again will be with us — living through us — forevermore. •

Christy Nockels is a worship leader and singer-songwriter with a passion for writing and speaking. She recently released her first book, The Life You Long For: Learning to Live from a Heart of Rest. Her podcast, The Glorious in the Mundane, inspires listeners to find the wonder of God at work in their everyday moments. Christy has released seven solo albums with sixstepsrecords and her independent label, Keeper’s Branch Records. Previously, she toured nationwide with her husband, Nathan, as the duo Watermark. Christy lives in Franklin, Tennessee, with her husband and their three children.

This article originally appeared in HomeLife magazine (April 2021). For more articles like this