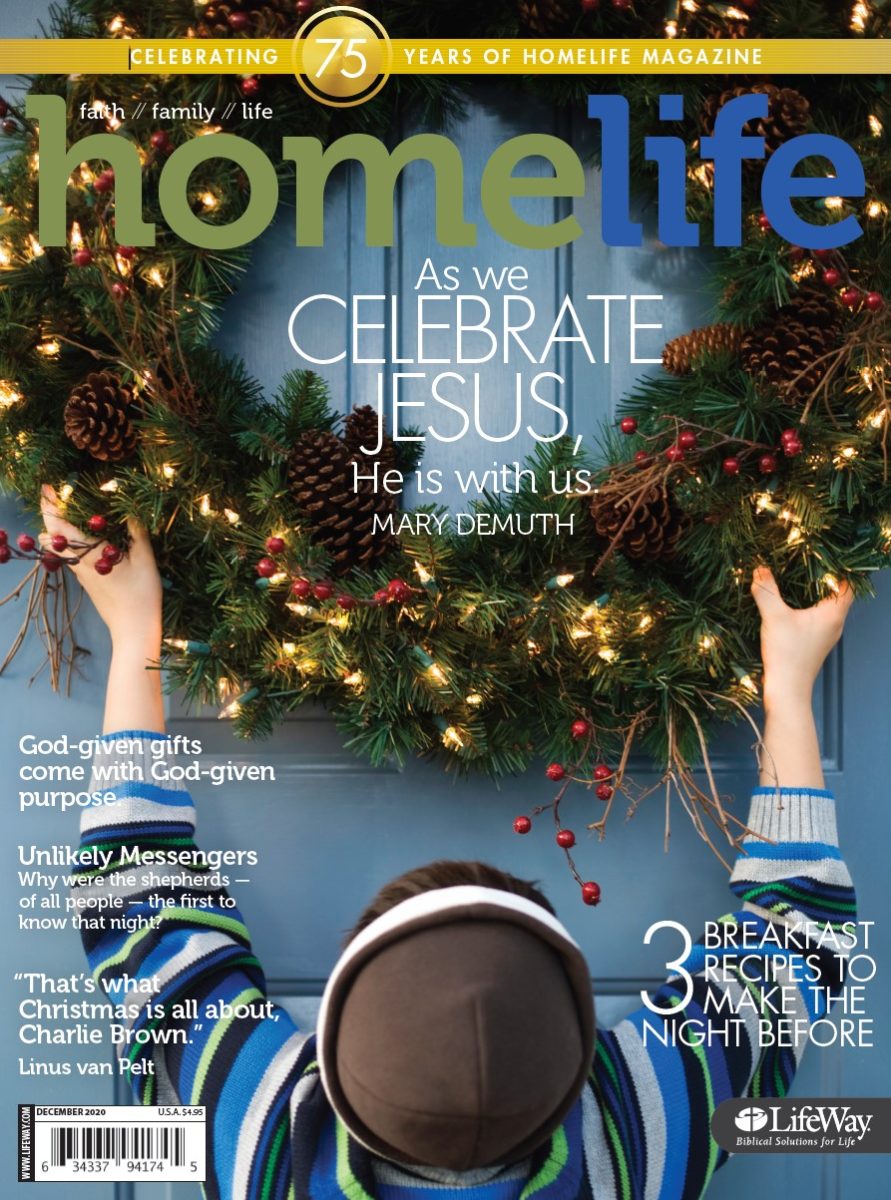 There is great joy in simple faithfulness.

I WOULDN’T NECESSARILY say I grew up in a “musical” family, but that didn’t stop us from always having music in our home, even if that simply meant someone was whistling, piano-playing, humming, or singing as he or she went about the day. We were no von Trapps, but we still sang. My little brother, in particular, would constantly sing to himself. Looking back, I fondly see this as just his way of expressing the little-boy joy in his heart.

But during my teenage years, it annoyed me to hear him singing to himself while we worked on homework at the kitchen table. I wanted peace and quiet! My mother recalls that one day I exclaimed in a fit of exaspera­tion at his incessant song, “Andrew, you think you live in a musical!”

It’s a funny moment to think back on now, but it’s also easy for me to see how simple it is to lose reflexive childlike joy as I get older. Joy doesn’t often feel automatic, but thank­fully we have a Savior who understands. In the spirit of Advent, let’s take a look at an unconventional family and see how they, despite earthly trials and worries, celebrated Emmanuel’s coming with joy.

In Luke 1, we read that the angel Gabriel came to visit Mary and announced, “The Lord is with you” (v. 28). Biblical commentator Robert Stein writes in the New American Commentary: Luke, “This is not a wish (‘may the Lord be with you’) but a statement and refers to God’s mighty power being present and upon Mary.” Initially, the gravity of these words — this imperative statement — trou­bled Mary, but the angel reassured her not to be afraid because she had “found favor with God” (v. 30).

When Mary heard what she had been called to do, she faithfully submitted, trusting that even though this was quite possibly one of the most traumatic things a young, betrothed Jewish girl could experience, God had a plan.

Sometimes troubles crowd out our joy, and our joy needs a little nudge. It wasn’t until after Elizabeth’s affirmation to Mary that Mary’s joy overflowed, and she sang her song of praise. Maybe people around Mary didn’t understand why she was acting like she was living in a musical, randomly bursting into song. But when we truly allow ourselves to experience the presence of Emmanuel, God with us, we can’t help but be filled with joy, even when trials beset us. Even baby John the Baptist, in innocent and automatic infantile joy, leapt in Elizabeth’s womb when he first experienced the presence of Jesus. Elizabeth’s words of encouragement can also serve as a reminder to lift up our sisters in Christ, to help relinquish their burdens so they can fully experience the presence of God.

What is a daily action of praise you can take this season to make sure you don’t lose sight of the call to joy? Is it like Mary’s song of praise? Is it like Elizabeth’s blessing and words of affirmation? Is it something else?

Next, let’s take a look at how Joseph responded to the news of Mary’s pregnancy.

God Is with Us

“The birth of Jesus Christ came about this way: After his mother Mary had been engaged to Joseph, it was discovered before they came together that she was pregnant from the Holy Spirit.

So her husband, Joseph, being a righteous man, and not wanting to disgrace her publicly, decided to divorce her secretly.

“But after he had considered these things, an angel of the Lord appeared to him in a dream, saying, ‘Joseph, son of David, don’t be afraid to take Mary as your wife, because what has been conceived in her is from the Holy Spirit. She will give birth to a son, and you are to name him Jesus, because he will save his people from their sins.’

“Now all this took place to fulfill what was spoken by the Lord through the prophet: See, the virgin will become pregnant and give birth to a son, and they will name him Immanuel, which is translated ‘God is with us.’

“When Joseph woke up, he did as the Lord’s angel had commanded him. He married her but did not have sexual relations with her until she gave birth to a son. And he named him Jesus” (Matt.1:18-25).

What had Joseph resolved to do before the angel spoke to him?

What did Joseph do after the angel spoke to him?

This passage doesn’t explicitly say this, but I think we can imagine from Joseph’s inward resolve to divorce Mary quietly that he wasn’t filled with an abundance of joy at the thought of his fiancée’s pregnancy.

Again, here we see someone facing what seems to be an insurmountable trial. Sometimes it’s hard for us, like Joseph, to have joy during difficult trials.

It may even seem impossible. But that’s when we, hard as it may be, have the opportunity to trust that God’s ways are greater than ours.

We need faith that joy will come in the morning (see Ps. 30:5). Joseph may not have had joy in his heart initially, but he trusted God’s plan was better than his.

The angel told Joseph to name the child Emmanuel, which means “God with us” (Matt. 1:23). Joseph likely couldn’t comprehend the miraculousness of this name’s significance at the time, but he trusted he would one day.

Have you ever been through a difficult trial in which joy seemed absent, and you had to trust that God’s ways were bigger than yours?

Next, let’s look at the baby of this unconventional family.

The Word Made Flesh

“In the beginning was the Word, and the Word was with God, and the Word was God. … The Word became flesh and dwelt among us. We observed his glory, the glory as the one and only Son from the Father, full of grace and truth” (John 1:1,14).

Young’s Literal Translation puts John 1:14 this way: “And the Word became flesh, and did tabernacle among us, and we beheld his glory, glory as of an only begotten of a father, full of grace and truth.”

I find it interesting that some of the most literal translations include the word “tabernacle.” The original Greek word is , which means “(specially), to reside (as God did in the Tabernacle of old, a symbol of protection and commu­nion): —dwell.”

For the original readers already familiar with the Old Testament, the use of this word would remind them of how God came and dwelt with the Israelites in the tabernacle. The word choice is special because it symbolizes Jesus’ holy dwelling with us. Just like the tabernacle occupied the center of the community in the Old Testament, Jesus came to dwell with us on earth, right in the center of everything.

What does God dwelling with us have to do with joy?

Christ tabernacling among us is the beautiful picture of God’s closeness when the Word became flesh. Because of this closeness, Jesus shares in our weak­nesses. He sympathizes with our struggles. He rejoices with us. He understands from living with us that our fleshly dwelling on earth is not always easy, but with faith for the joy ahead, we can endure and lift up our praise to the Father.

When we feel troubled and fearful like Mary initially was, or disappointed and disheartened like Joseph may have been, remember: God is with us; we don’t have to be afraid. We can seek to live a Christian life similar to that of a child who can’t help but reflexively sing or leap for the joy in his heart. We can shout for joy and gladness because Jesus came to dwell among us!

Erin Franklin is a production editor at LifeWay and is a graduate of Lipscomb University. The Tennessee native is passionate about communication and enjoys spending time on her family’s century farm, meeting new people, and playing a good table tennis match. You can connect with her on Instagram @erin_franklin and on Twitter @erinefranklin.

This article originally appeared in HomeLife magazine (December 2020). For more articles like this