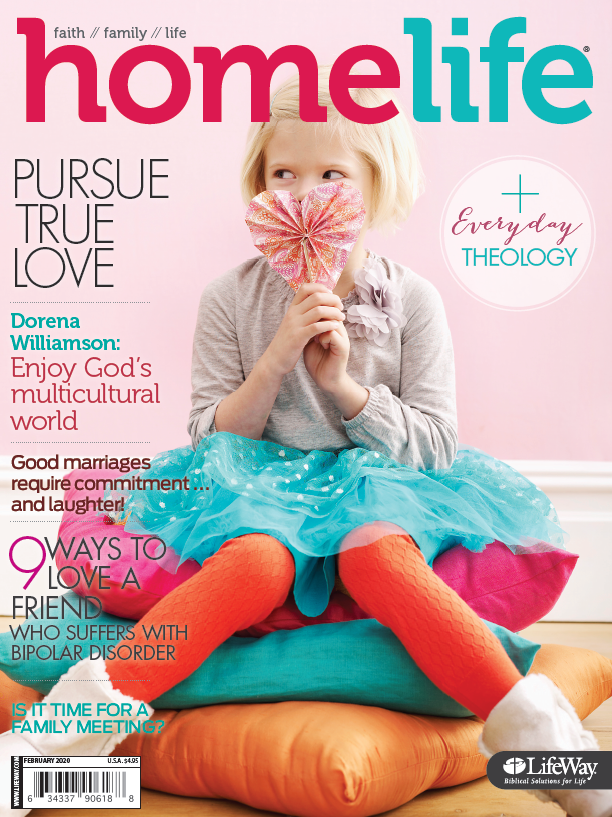 The Color of Love

Lord, open our eyes to Your great, multicultural world.

There was once a man named John who joined a groundbreaking team with his brother. In spite of the gender and reli­gious norms in culture, the team leader was fueled by a love unlike anything John had ever seen.

Eternally changed by the boundless love of his leader, the Lord Jesus, John would go on to write several letters that we treasure. Calling his audience “beloved,” John gets right to the point about what kind of love they’re called to: “If anyone says, ‘I love God,’ and yet hates his brother or sister, he is a liar. For the person who does not love his brother or sister whom he has seen cannot love God whom he has not seen” (1 John 4:20).

This kind of love is meant to move people out of their comfort zones. God’s law of love goes beyond zip codes, denominations, party loyalties, and job titles. John makes it clear — if you claim to love God whom you haven’t seen, you don’t get to hate humans you do see.

One has to wonder, though, if some Christ-followers skip right over this passage. Instead of love, hatred and racism are sanctioned in the name of doing God’s work. Even churches have twisted Scripture so Christians feel com­fortable in their lack of love. As heartbreaking as this is, we can look to another apostle to see how the power of Christ’s love could change a heart full of hate into a heart filled with love.

Before he became the great apostle, Paul was Saul the persecutor. He was bent on ravaging the church (Acts 8:3), breathing threats and murder against the disciples, and even enlisted the religious leaders in helping him take prisoners of Christians (Acts 9:1-2). This educated and passionate man thought he was right in persecuting fol­lowers of Jesus. But the light of God broke through his heart, and he became a leader whose writing and work changed the early church and the course of Christianity.

On one trip, Paul spoke to an intellectual crowd in Athens. As he shared the good news of the gospel, he added in this verse: “From one man he has made every nationality to live over the whole earth and has determined their appointed times and the boundaries of where they live” (Acts 17:26).

Paul is referencing Genesis 9–10, where Noah’s three sons — Shem, Ham, and Japheth — populated the whole earth. God details the lands and borders where all the diverse people groups settled, along with their unique nations and languages. How beautiful that redemption is inclusive of our cultural identity! Our ethnic story, filled with pain and promise, is valued by God and should also be valued by Christ-followers.

Friends, it’s time for a love check. Love comes from God because He is love. He expects us to love as He does. Jesus stretched out His arms and extended love to those who were persecuted, shunned, and excluded. Because of His sacrifice, Gentiles, who were once foreigners, have been grafted in and brought near.

Paul, the one who fought against Christ-followers, tells fellow believers this about our collective identity: “So then you are no longer foreigners and strangers, but fellow citizens with the saints, and members of God’s household” (Eph. 2:19).

To those who had been excluded, coming to faith in Jesus meant they’re now invited in. They’re no longer strangers at the door but family members together. This new citizenship, however, wasn’t meant to be an erasure of our differences. Why else would Scripture take so much time to note gender, ethnic, and cultural differences among people?

In a society where white culture is considered the norm, white people don’t always think of themselves as having ethnicity. Because of this, conversations about racial and ethnic differences can be awkward at best, or muted entirely with colorblind rhetoric. Some well-meaning believers think unity means not seeing color. If a topic or a problem related to culture or race is raised, many are quick to label you as “divisive” for calling out racial sin.

Race is a social construct that was created to categorize people, with whiteness being superior and blackness inferior. While the Bible uses terms like “nations,” “tribes,” “lan­guages,” and “peoples,” those groups are filled with individ­uals and each one matters to God. David declares that we’re “remarkably and wondrously made” (Ps. 139:14), and that includes the shades of beauty in our skin color. To diminish our racial differences, to mute a celebration of the cultural nuances that make every people group unique, is to detract from God’s grand handiwork!

Because history has, by and large, been told from the white perspective, Carter G. Woodson developed Negro History Week in February of 1926 so that black Americans could learn about their heritage, and for other Americans to also understand it. Later it expanded to a month-long celebration and awareness. Other cultures have followed: May is Asian/ Pacific American Heritage Month, September is National Hispanic Heritage Month, and November is Native American Heritage Month. These months are a great opportunity to read about, learn about, and appreciate other cultures.

Unfortunately, I’ve heard people ask why there isn’t a white history month. Others question the existence of black maga­zines and black churches. These statements show ignorance and often an unwillingness to understand how institutions and celebrations were created, literally forged out of the fire of oppression.

When black worshipers were relegated to the balcony seats in the house of God or excluded altogether from worshiping with white believers, they began starting their own churches. The African Methodist Episcopal Church was the first black denomination organized in 1816.

Black magazine founders grew weary of seeing journal­ists primarily and often exclusively featuring white cover models and influencers, so they created their own collections that catered to the culture and uplifted the beauty of their ethnic group. Historically black colleges and universities were created to give collegiate access to black students who weren’t permitted to enroll in white institutions, even into the 20th century. Many of us are unaware of these painful chapters of history and the origin of unique racial institu­tions that helped to fill a void and uplift people who have been oppressed.

Embrace the Beauty of Differences

So how do we open our eyes to the multicultural beauty all around us?

✽ By agreeing with God that all people and all cultures are part of His grand design. As you read through Scripture, ask the Holy Spirit to teach you with a renewed lens that looks for the unique differences of people throughout His Word. Read Genesis and research the nations that originated from Noah’s sons. Consider how many people of African descent were used in mighty ways throughout Scripture, even the women in Jesus’ genealogy. See the festive parade of nations present when the Holy Spirit was poured out in Acts 2. Learn these Bible truths and teach them to others.

✽Learn your own ethnic story. Understand that you’re not better than or beneath any other people group.

✽Become a student of other cultures with appreciation, not appropriation. Look around at those who impact your life. Do you have diverse friends who impact you? Do your children only interact with people just like them? What are you teaching them? What movies, restaurants, festivals, events, ministries, books, and podcasts can you add to your life that enrich and educate you on the wide and wonderful world God has made? Diversify the people you follow on social media and pursue conferences and events that feature people of color in leadership. “Those people” will become your people in a beautiful community.

✽Constantly check your bias. Every human has the pro­pensity to be biased against others. And bias is rooted in fear and ignorance. As Christians we should live lives of repentance so God can search our hearts and point and pull out the small weeds of hatred, racism, and bias.

✽ Shift awareness into action by becoming an ally who loves diverse neighbors well. Biblically, our neighbor isn’t limited to proximity or preference. The foreigner among us (at our borders or across the world), and the helpless and the vulnerable should be a part of our community and care.

Our eternal story has a grand conclusion: We’re all together with our cultural distinctions intact!

“After this, I looked, and there was a vast multitude from every nation, tribe, people, and language, which no one could number, standing before the throne and before the Lamb. They were clothed in white robes with palm branches in their hands. And they cried out in a loud voice: Salvation belongs to our God, who is seated on the throne, and to the Lamb!” (Rev. 7:9-10).

We love to raise a “hallelujah” over the diversity in heaven, but we don’t have to wait for heaven to experience the beauty of diversity. Jesus prayed in Matthew 6:10: “Your kingdom come. Your will be done on earth as it is in heaven.”

Dorena Williamson is a bridge builder, speaker, and writer who loves sharing God’s grace in stories for children. Her books, GraceFull, ColorFull, and ThoughtFull, are inspired by Strong Tower Bible Church, a multicultural faith community where she has served as first lady for 22 years. She and her husband, Dr. Chris, have four children.

This article originally appeared in HomeLife magazine (March 2020). For more articles like this