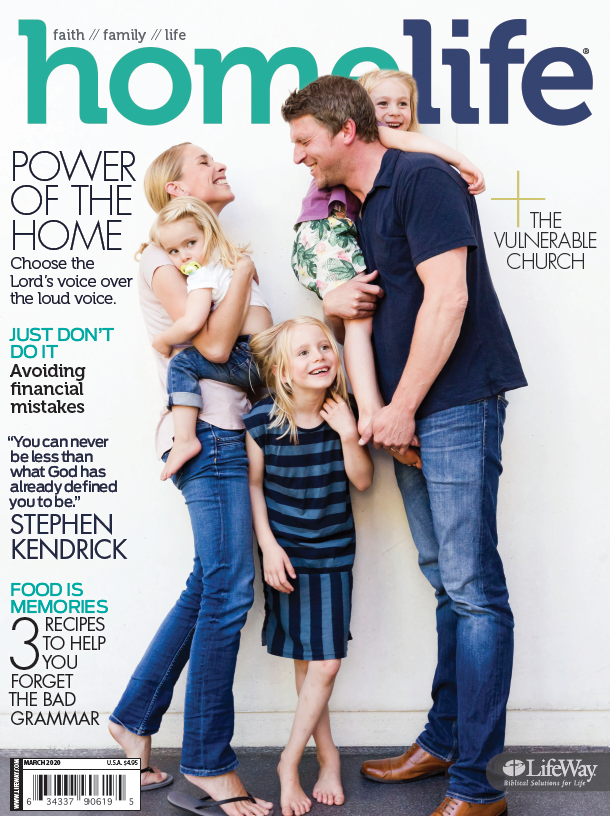 The Least of These

God calls us to come alongside and advocate for the most marginalized.

THE FLIGHT CREW prepared for take­off. I took a deep breath and closed my eyes. I wasn’t nervous, actually far from it. No, this breath served a greater purpose. I could finally exhale. This was a sigh of relief.

For months on end, I had been preparing for the launch of my book, Vulnerable: Rethinking Human Trafficking. After a strenu­ous season of writing and editing, I was finally done. Having just celebrated the launch 30 hours earlier with 70 of my closest friends, I could breathe easily knowing that the book was out there. I relaxed as we reached our cruising altitude.

As we climbed to 30,000 feet, I made time for much needed devotional reading. For some reason, I began exploring the story of Job. For anyone who desires to see a gut-level picture of vulnerability, the Book of Job is a great place to start.

JOB’S VULNERABILITY takes center stage as he goes round and round with his so-called friends. Their own vul­nerability is hidden behind their unchecked self-protective measures, namely their own self-righteousness. Repeatedly, Job asserts his integrity and they dismiss him. Rather than believe him, they challenge Job to look within and admit that his own sin is the cause of his apparent downfall. In other words, rather than seek to protect Job, they accuse him. Not only has Job lost every material possession but he has also lost the community that he so desperately craves. Job is truly vulnerable.

But what caught my attention while reading the oldest book in the Bible was how Job desired to state his case to God. Job wouldn’t be deterred. He would plead his case to the highest court. He wanted answers.

The plane made its final descent as I read the climactic conversation between God and Job. What struck me was how God spoke to Job.

His words thundered as he spoke from a whirlwind: “Where were you when I established the earth? Tell me, if you have understanding” (Job 38:4). God alone created and sustains all creation, from the birth of mountain goats to the placement of the stars.

The Lord continues to put the situation in the proper perspective by directly addressing Job: “Will the one who contends with the Almighty correct him? Let him who argues with God give an answer” (40:2).

Job was speechless. The words of God shook him to his core. He now saw things in a different light and could only respond in repentance: “I am so insignificant. How can I answer you? I place my hand over my mouth. I have spoken once, and I will not reply; twice, but now I can add nothing” (40:4-5). But God isn’t finished speaking. He rebukes Job’s friends for their harmful counsel and has Job pray for them. As the story reaches its conclusion, the reader discovers that God ultimately restores Job and brings the healing and community that he so desperately craved.

Embracing My Own Vulnerability

AS THE PLANE TOUCHED GROUND in Chicago, I reflected on what I had just read. The God that I worship is the same God whom Job worshiped. What a thought! More so, Job’s words, “even if he kills me, I will hope in him” (13:15a), were an intriguing challenge to me. Could I maintain that perspective if I lost everything?

Having reached my destination, my phone immediately started vibrating when I switched it off airplane mode. The first text message from my room­mate stopped me in my tracks: Hey guys, I tried to call. Pretty shocking news, but there’s a fire on the third and fourth floors. Fire department is here. Not sure about the status of our apartment. I think that they put the fire out. There’s water coming down. We’re stuck in the lobby. Will send more information when I have it.

I was in shock. I honestly had no idea what to do. Making my way to the rental car station, I couldn’t believe that this was actually happening. How could this happen to me?

On the way to the parking garage to pick up my car, I found myself walking aimlessly. I was overwhelmed as I thought about how I may have lost everything that I owned in the con­text of a few hours. One of the employees abruptly stopped me.

“Not really,” I answered.

“Well, my house has apparently burned down, and I don’t have renter’s insurance. It’s just a lot to process.”

She didn’t miss a beat. “You know that God’s got you, right? If you go through it, you can grow through it. He’s watching over you right now.”

I was dumbfounded. Here I was in a new city during a crisis and a fellow Christian was encouraging me to rest in God. Honestly, it was what I needed.

In the next few hours, I would find out that though our apartment didn’t actually burn, the smoke damage was so extensive that it would be ren­dered uninhabitable.

Later that evening, I would sit down with a friend who listened as I tried to get a handle on everything that was happening.

In less than 30 hours, I had gone from celebrating my book’s release to potentially losing everything; the highest high crashed into the lowest of lows. In a flash I went from publishing my book to experiencing its content first-hand.

You might be like me and think that this could never happen to you, but the truth is that we’re all one major emer­gency away from losing everything.

Embrace Your Own Vulnerability

WHEN WE’RE FORCED TO COME FACE TO FACE with our own lim­itations, it changes the way in which we interact with others. We begin to show more empathy and compassion because we know we’re made of the same stuff as those around us. Though our socio-economic situation may differ, our situation can change rap­idly. As we meditate on this truth, we find that rather than being like Job’s friends, we can approach the broken­ness of others from our own frailty. In a real sense, our own perceived weak­ness actually qualifies us to work with others who are experiencing severe adversity. Rather than approaching others from a standpoint of superi­ority, our vulnerability is the great equalizer, putting us on the same level with those whom we wish to serve.

My point is that the more we become aware of what makes us vulnerable, the more we will be able to “see” others. Rather than slapping a label on them and immediately disre­garding them, we will see their humanity. Rather than solely focusing on protecting ourselves, we will be in the right position to protect our neighbor.

HUMAN TRAFFICKING is the exploitation of vulnerability for commercial gain, whether it is for sex, labor, or domestic servitude. Trafficking happens when someone with power exploits someone with less. Most often, those who are trafficked are trafficked by people whom they know — peo­ple who take the time to groom the person to do what they ultimately want them to do.

Human trafficking impacts more than 40 million people globally. Human trafficking isn’t a one-issue type of cause. As a matter of fact, it is a catch-all injustice. Those most often targeted are those most vulnerable, those who are marginalized, and those without options. Traf­ficking is a sanctity of life issue affecting everyone from our unborn neighbors to our undocumented neighbors. Traffickers prey on those living in isolation from healthy community. I ask myself what would happen if we could be a vulnerable community for those most vulnerable?

EMBRACING BOTH OUR VULNERABILITY and the vulner­ability of others will, without a doubt, drive us to depend on God. The God who spoke through a whirlwind now speaks to us through a cross. Jesus Christ not only suffered a horrific death, but He also took the suffering of the world on His shoulders. Like Job, Christ was maligned by those around Him. But only Christ was truly innocent. Jesus lived, died, and rose to save sinners, like you and me. As we repent of trying to have it all together and not trusting God with our suffering or the brokenness around us, we join Job in discov­ering that we can hope in God.

Oftentimes, suffering drives us to question God. Whether it’s our own experience or the experience of others, we tend to think that there’s no way that healing will ever come. We listen to that inner voice that accuses us saying, You deserve this. You did this to yourself.

But the truth remains that regardless of what we’ve done or what has been done to us, we’re loved and accepted by God because of what Christ has done for us. •

Raleigh Sadler speaks and writes on the topics of vulnerability and human trafficking. He recently published Vulnerable: Rethinking Human Trafficking. In 2013, he began a movement called Let My People Go, which grew into a nonprofit organization that comes alongside and empowers local churches to address the injustice of human trafficking in a holistic manner.

This article originally appeared in HomeLife magazine (March 2020). For more articles like this